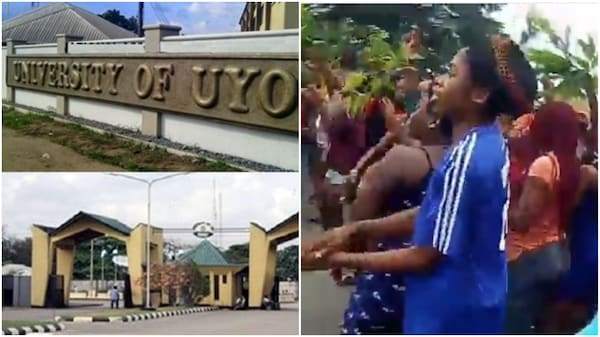 Female students in the University of Uyo in the Akwa Ibom State capital have on Thursday stormed the roads in the area to protest over the state of insecurity in the institution and incessant rape of female students by hoodlums.

Naija News gathered that robbers had been invading the institution to rob students of their money and wares and later raped the female students.

In their protest, the students said they have been helpless victims as the school’s authority is not doing enough to salvage the situation.

Recall that a female student of the school was said to have been stabbed by hoodlums although the student managed to survive after much medical attention.

Naija News understands that the students marched to the Vice Chancellor’s office and demanded a stop to raping and robbing of female students by robbers.

Armed with leaves and placards of varying inscriptions, the students stormed the VC’s office, thus disrupting activities of the day, chanting, “we need security.”

The reactions of the students during the protest was captured with one student identified as Obong Hanson, saying the school authorities “imposed uniforms, imposed ban of wrist watches in exam halls. We obeyed. If we keep to our own side of the deal, why not perform your duties? Beef up security with that same energy.”

Similarly, another student, David Oceans, on Twitter said “When we came to this school they said “Uniuyo is a brand, protect it” what kind of brand will pay less attention to its customers? The school is no brand if students are afraid they may be the next on the Obituary flier.”

While WannaBeShugaDaddy, as identified via his twitter handle, is of the opinion that; “Two times in the same week. Hall 6 hostel of the town campus University of Uyo has been attacked by hoodlums.”

According to Idorenyin Gregory on Twitter, “TERROR IN UNIVERSITY OF UYO! *Gradually becoming a hub of small arms & light weapons. *Unchecked occult activities and unlawful practices. *Drug and substance abuse. It’s time the authorities do something about students security and welfare.”

Meanwhile, the Vice Chancellor of the school, Prof. Enefiok Essien, while addressing the students further angered them when he said, “you should be patient, you need security and we need security.”

He went ahead to urge the students to be patient, saying the school was on top of the situation.