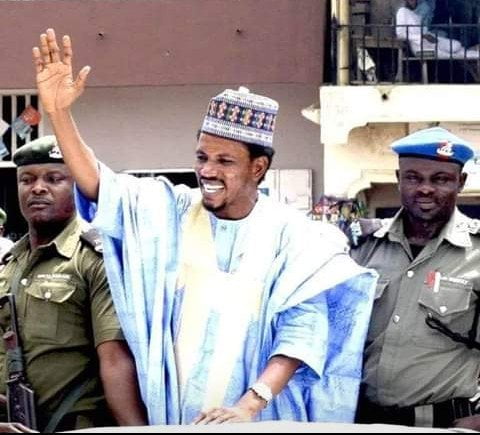 Senator Elisha Abbo (PDP-Adamawa North) has been caught on camera physically assaulting a woman at an adult toy shop in Abuja.

Abbo, Nigeria’s youngest senator, was caught hitting the woman after she begged him not to assault the shopowner whom the lawmaker accused of insulting him.

The assault was reported on May 14 at the Maitama Area Command Headquarters on Nile Street, but the police told the victim to go look for the Senator’s telephone number or they would not be able to do anything about it, Premium Times reports.

According to witnesses and sources, Abbo had entered the shop at about 6:00 p.m. on May 11, a Saturday accompanied by three young women to purchase adult toys.

However, shortly after they began shopping for the toys, one of the three girls brought in by Mr Abbo started throwing up.

She vomited multiple times, prompting the shopowner to remark that the woman should have vomited outside and not inside her shop, especially since she was not a child.

The senator, who was said to be agitated by the sudden illness of one of his girls, was said to have accused the shopowner of poisoning the store’s air conditioner.

The shopowner’s argument that if the air conditioner had been contaminated others in the shop would have also taken ill further angered Mr Abbo.

Premium Times reports that in the first five minutes of the 10-minute video Abbo is seen sitting on a generator near the entrance of the shop.

He could be heard within this time making calls and asking some people where they were and how close they were.

Just before the first half of the video, an armed police officer walked in.

Mr Abbo explained to the officer in Hausa that the woman insulted him and that he had called the assistant inspector-general (AIG) over the matter, who then assured him that he would call the police commissioner to call the Maitama Area Command.

He also said he was disappointed in the shopowner, with whom he said he had been friends for five years.

The Senator told the policeman to take the shopowner away. The shop owner quickly called her father to inform him that Mr Abbo had called the police over the matter and that she was about to be taken away.

Mr Abbo asked the shop owner to stop the call because he was talking to her, a demand the woman refused to accede to. Another man could be seen coming from behind the police officer to snatch the shopowner’s phone from her.

Next, the shopowner’s friend who had been standing nearby tried to intervene by pleading with the second man to take things easy.

Mr Abbo swiftly descended on the shopowner’s friend, saying she was “very stupid” and slapping her repeatedly, including directly on the eyes.

The senator then demanded that the two women should be taken to the police station. He repeatedly told the shop owner that he was disappointed in her for calling him a drunk and that he would have harmed her more and closed down the shop but for their friendship.

It was gathered that the assaulted woman, who is nursing a child, was taken to a hospital, where she was treated for eye inflammation and other injuries she sustained during the attack.

Senator Abba was reported to have threatened to deal with the shop owner if the footage of his violence ever surfaced.

The victim and her lawyer were said to have demanded an apology from Mr Abbo. They also want him to settle the medical bill and desist from further threats of physical harm against the woman.

They also wanted a criminal investigation and possible prosecution of Mr Abbo for his action.