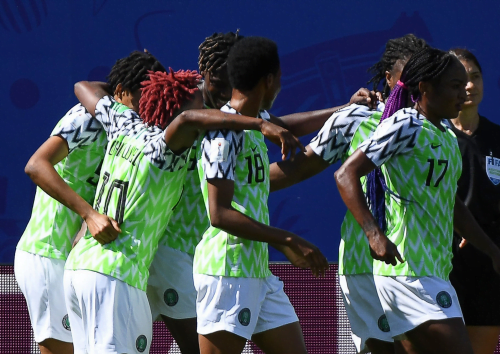 The Super Falcons has qualified for the knockout stages of the Women’s World Cup for the first time in 20 years.

The Falcons have reached the knockout stages of the Women’s World Cup just once before now, a quarter-final appearance in the competition in the United States in 1999.

They will confront former champions Germany in the last 16 of the 2019 Women’s World Cup in Grenoble on Saturday.

The Falcons emerged as one of the best losers to the round of 16 after finishing third in Group A behind France and Norway but had to endure a torrid time before confirming their place in the last 16 of the event.

The female Eagles had ended their Group A campaign with three points, courtesy of a 2-0 win over the Korea Republic and losses to former champions Norway (3-0) and hosts France (1-0).

But they had to wait three days later after their final group game on Monday to know their fate.

Further, Cameroon’s Lionesses beat New Zealand 2-1, meaning they (Falcons) had to slip from third on the best third-placed teams table, to fourth.

A 3-0 win for Chile over Thailand would have dashed the Falcons dreams of qualification but having led 2-0, the South Americans lost a penalty late on in dramatic fashion to hand the Nigerians a spot in the knockout stage.

Meanwhile, Cameroon also qualified as one of the third best-placed teams, thus making it the first time two Africans will reach the knockout stages of the competition.

A video online showed the Nigerian ladies weeping after Cameroon scored their second goal to advance to the round of 16.