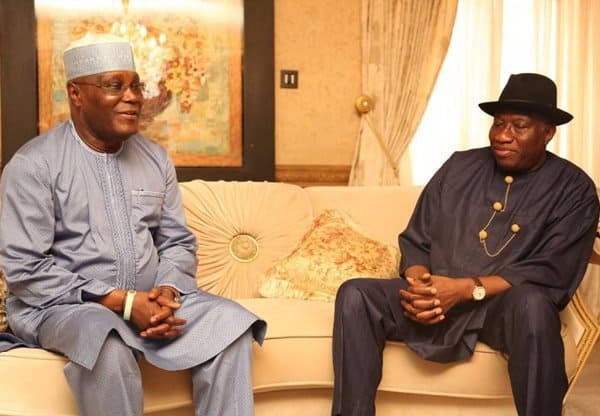 Former President Goodluck Jonathan has stated that the presidential candidate of the Peoples Democratic Party (PDP), Atiku Abubakar, was right not to accept the victory of President Muhammadu Buhari at the elections.

The former president made this known in an interview a Premium Time’ special publication on the Fourth Republic 20th anniversary.

Jonathan said the fundamentals of the 2015 election, which saw him become Nigeria’s first incumbent leader to accept election defeat, were “very different” from the 2019 elections.

“It is not right for anybody to compare Jonathan’s decision in 2015 with Atiku’s position in 2019 because they are two different scenarios,” Jonathan said.

He noted that his decision to concede the 2015 presidential election to Buhari cannot be compared to Atiku Abubakar’s lawsuit over the outcome of the February 23 elections.

“In 2015, I was a sitting president,” Mr Jonathan said. “Although INEC is an independent body, every structure of government still operates under the president one way or the other.”

“So I was a president and INEC conducted the elections under my watch.

“Atiku was not a sitting president and if he or the party feel that things were not done right, of course, they are at liberty to challenge it in court,” He said.

Speaking on his tenure as president, Jonathan stated that the economy under his watch was consistently on the rise.

“Nigeria was the number one destination for foreign direct investment under my tenure. We were rated the biggest economy in Africa. We transformed the agricultural sector and brought the nation closer towards food self-sufficiency,” he said.

“Our currency was stable and inflationary pressure was kept at single digit. We may not have been comfortable with the exchange rate of less than N200 to the dollar at that time but I can tell you that the economy was stable.

“The stability we had ensured that business people and investors could plan because you were sure of the exchange rate and the cost of your goods at any point in time, whether you were exporting or importing. Economically you could say that Nigeria was stable and strong,” Mr Jonathan said.