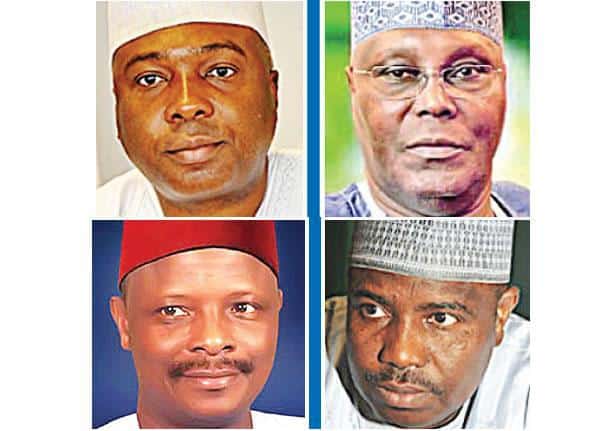 Leaders of the Peoples Democratic Party (PDP) met in Abuja on Friday night where they agreed to call a National Executive Committee meeting of the party to discuss the security situation in the country.

The meeting has been tentatively scheduled to hold on May 22, while that of the PDP Governors’ Forum may hold a day earlier.

The meeting, according to investigations by The Punch, agreed to hold NEC and other caucuses meeting to review the state of the nation and address Nigerians on steps to be taken.

It was gathered that the leaders expressed worry over what they called frightening instability of the nation.

This, sources close to the meeting said, the leaders attributed to the alleged abuse of power by the Federal Government.

A source, who was at the meeting said the main opposition leaders accused the government of “manipulations of institutions of government, insensitivity to the plight of the citizens, constitutional violations, election rigging as well as the vindictive tendencies of the Muhammadu Buhari-led All Progressives Congress administration.”

The meeting, which held at Maitama, Abuja, was also said to have debated the spate of killings in the country.

A source, which was at the meeting, said, “We also reviewed what we described as the efforts by the APC to intimidate, annex and manipulate the judiciary, especially on election matters as well as allegations of widespread corruption and official high handedness of the Buhari-led administration.”

Another source also said that there were alleged moves to clamp down on Obi, and accused the Chairman of the Economic and Financial Crimes Commission (EFCC) Ibrahim Magu.

“We have it on good authority that Magu is after Saraki because the Senate he leads refused to confirm him as the chairman of the commission,” the source said.

The source also said that the meeting discussed the alleged plan by the anti-graft agency to clamp down “on officials of Rivers State government, despite the order of the High Court restraining it from doing so.”

It was also learnt that the meeting reviewed the security situation in the country and resolved further to take the matter to its NEC meeting.

A source said, “We are worried about the unabated killings and kidnappings in Zamfara, Borno, Kaduna, Taraba, Yobe, Adamawa, Kogi, Plateau, Gombe, Edo, Ondo and Abuja and other states of the federation.

“All these are happening because we have an incompetent administration that attaches no value for the wellbeing of our citizens.”

On the election cases that are pending before different election petition tribunals, it was gathered that the PDP leaders raised fears that cases involving the party and its members that will end at the Court of Appeal might not get justice as a result of alleged partisanship of the President of the Court of Appeal, Justice Zainab Bulkachuwa.