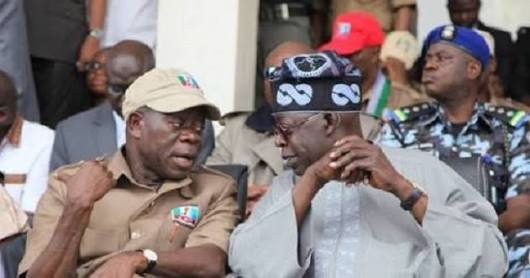 Dr Junaid Mohammed has berated the National Chairman of the All Progressives Congress (APC), Adams Oshiomhole and Bola Tinubu for trying to impose Ahmed Lawan and Femi Gbajabiamila as leaders of the 9th National Assembly.

Speaking on Sunday to Telegraph, Mohammed described the imposition by the party on lawmakers-elect as dictatorial.

The second republic federal lawmaker stated that the utterances of Oshiomhole, on the leadership tussle in the National Assembly portrayed him as someone who did not understand party leadership.

Junaid Mohammed said: “I admit that because of what happened last time (2015), the APC wants to make sure it gets it right this time. But it appears that the same carelessness with which they handled the matter last time is also repeating itself.

“Last time some members of the party felt that they had something called independence or autonomy of the parliament so they can do what they like. But it would have made a lot of sense if they had won the election as independent candidates. It is only then that they can talk about the independence of the legislature.

“However, Oshiomhole has carried over his attitude as a labour unionist and enforcer of strikes into the running of a political party and nobody has called him to order.

“If he thinks that it is only by bullying members of the party in the National Assembly that they would achieve their goal then he must have a rethink.

“He should never have been the National Chairman of the ruling party or any other party for that matter. We tend to think people will change their character when they occupy certain positions of authority but it doesn’t happen that way. It is not possible for a leopard to change its spots,” he said.

Mohammed also said that the fact that both Senator Ahmed Lawan and Hon. Femi Gbajabiamila are perceived as Bola Ahmed Tinubu’s candidates had already become a challenge for the duo who are seeking to lead the incoming National Assembly.

“It is an open secret that Tinubu had a presidential ambition in 2023 and whatever he does now is perceived as designed to boost his own chances in the future.

“But how many votes can Lawan mobilise for him in Yobe and the North and how many votes can Gbajabiamila deliver for him in Lagos and the South West? But I don’t see how fixing certain people in certain places in the National Assembly can advance his political career. It will not and he needs to very careful,” he said.