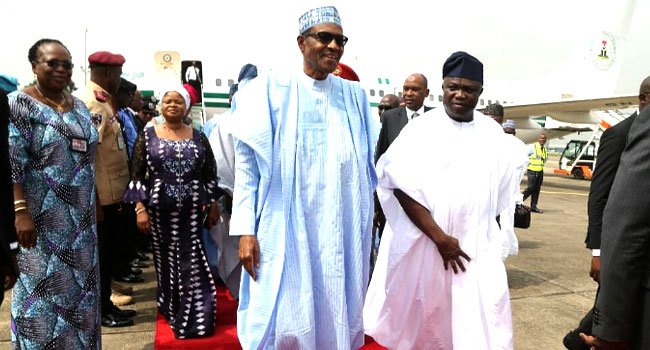 Naija News recalls that the President and members of his entourage departed the Presidential wing of Nnamdi Azikiwe International Airport in Abuja at about 9.48am.

President Buhari, who is on a one-day official visit to Lagos, the commercial capital of Nigeria, is expected back to Abuja immediately after the inauguration of the projects.

On Buhari’s visit, he is expected to inaugurate the Institute of Maternal and Child Health (Ayinke House), an ultra-modern 170-bed Obstetrics and Gynaecology specialist hospital located within LASUTH and Lagos Theatre.

It is "in addy" commissioning as Ambode will soon leave office and he doesn't want Sanwoolu to take the credit. 😂. https://t.co/o6rcHNLv7H

Other developmental projects to be inaugurated by the President include the Oshodi Transport Interchange and International Airport Road as well as 820 Mass Transit buses.

Gov. Ambode is trying to avoid argument on who did this project or who did that!
He is commissioning 65% Completed project!

I took these pictures while going to work this morning. This is bridge to MMIA 1
☹️😰 pic.twitter.com/UXiX1MHviT

Naija News learnt that the president was received by Governor Akinwunmi Ambode of Lagos State and other governors including, Ibikunle Amosun of Ogun, Abiola Ajimobi of Oyo and Kayode Fayemi of Ekiti State.

The president was also received by the Lagos State Governor-elect, Babajide Sanwo-Olu and his deputy Obafemi Hamzat, amongst others.

Here are some other reactions to developmental projects executed by the Lagos State Government, led by Governor Akinwunmi Ambode‘s administration.

Am a PDP man, I love Ambode's gut, I love his giant stride towards some infrastructural projects, though many integral parts of Lagos had nothing to say about d administration but all in all, he performed creditably well better than his predecessors. For all…….. https://t.co/SosSHOrM6u

PMB is everyone's favourite Grandpa. He is over compensating with Ambode since he could not persuade Lagosians to give Ambode a second term.

Buhari when Ambode hands him the same pair of scissors, at the same location, to comission the same uncompleted bus stop, for the 2nd time pic.twitter.com/HX67AQAINl