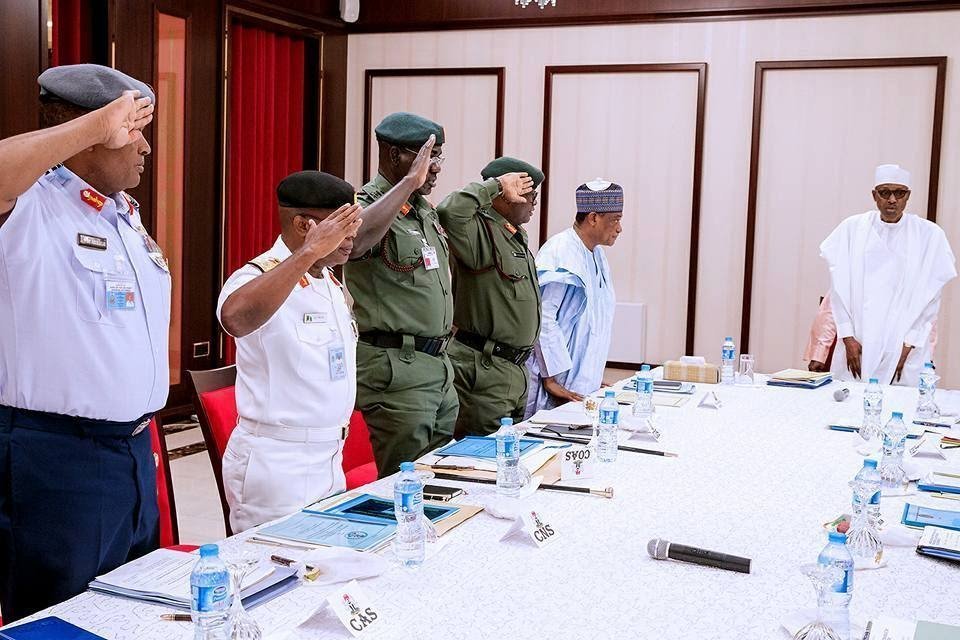 There were indications on Thursday that insecurity, especially banditry and kidnappings in some parts of the country, which have experienced an upsurge recently and claimed several lives, may have unsettled the presidency, service chiefs and the Acting Inspector-General of Police.

The development, Daily Independent gathered, may have spurred more frequent meetings between President Muhammadu Buhari, and his service chiefs, especially the Acting Inspector General of Police and other personnel directly involved in the nation’s security architecture.

The ministers of Interior and Defence, Lt. Gen. Abdulrahman Danbazzau and Brigadier-Gen. Mansur Dan-Ali also took part in the meeting which lasted for about three hours.

Under normal circumstances, the meeting which affords the service chiefs the opportunity to brief the president on the security situation in the country usually holds every Monday morning.

However, that of this week may have been shifted to Thursday, probably due to the president’s absence on Monday.

The president was away in Dubai, the United Arab Emirates (UAE), where he participated in the ninth edition of the Annual Investment Meeting.

He returned to Abuja on Tuesday night, a day ahead of his scheduled return, which should have been on Wednesday.

He is believed to have cut short his trip owing to developments in Zamfara, Kaduna, and some other parts of the country.

While the president was away in Dubai, the Police IG, under the permission of the presidency, had launched ‘Operation Puff-Adder’ in Zamfara State to flush out bandits terrorising the state.

The IG, who was flanked by the Chief of Staff to the President, Abba Kyari, and the Director-General, Department of State Services, Yusuf Bichi, while briefing State House correspondents earlier, had also banned all mining activities in the state, directing all miners to relocate from the sites.

Within that period, 20 members of Adara community in Kaduna State, also lost their lives in violence-related cases, prompting President Buhari to issue a stern order to security operatives to deal ruthlessly with those perpetrating the crisis.

But commenting on how well the instruction had been adhered to, after the meeting at the State House, Abuja, the Chief of Defence Staff, General Gabriel Olonisakin, said they reviewed and revised the strategy by the security chiefs so as to address all the challenges confronting the country.

Asked whether there was a marching order from the president to the security agencies over the increasing rate of insecurity in the country, General Olonisakin said: “Yes, the marching order is for us to deal with these issues immediately and ruthlessly and ensure that all those bandits are immediately dealt with and all those issues that are bordering our security are properly addressed.”

The IGP, on his part, told State House correspondents that the Abuja/Kaduna road had now been rid of kidnappers, and gave assurance that motorists would no longer have cause to fear to ply that road.

Adamu disclosed that following confrontations with the bandits and kidnappers, some were fatally injured, while others had been arrested.

Naija News recalls that owing to the spate of attacks on the Kaduna highway, many travellers had had to abandon their vehicles, increasing patronage for the light rail train service from Abuja to the state.