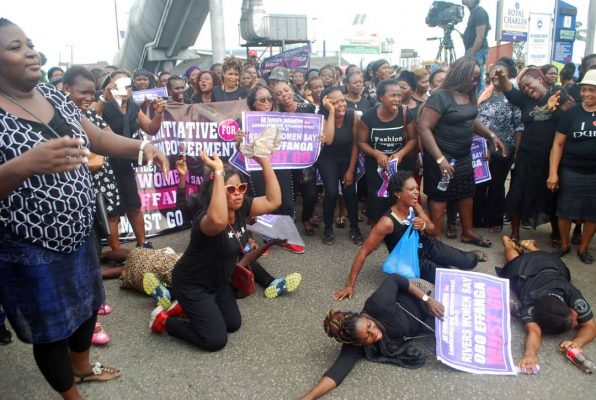 It was drama today when Two different women groups and traders took to the streets of Port Harcourt, Rivers State to protest against and in favour of the state Resident Electoral Commissioner (REC), Mr. Oboh Effanga, who conducted the 2019 elections in the state.

While a group of protesters asked that the REC be transferred out of the state, another group are demanding that the INEC retains him in the state.

This is coming a day after some leaders and members of 85 political parties in the state took to the streets of Port Harcourt to celebrate the re-election of the state Governor, Nyesom Wike, Naija News reports

In a protest today, pro-Effanga women group who took off from the popular Isaac Boro Park with placards bearing varying inscriptions such as “Rivers women say Amaechi cannot be Governor for 3rd term”, “Wike must come back for second term”, “INEC collate and declare governorship election result in Rivers state”, among others, visited the office of the Department of State Security (DSS), where their leaders were addressed by the representative of the State Director of DSS.

Speaking on behalf of the protesters, the leader of the protesting women and Rivers State Commissioner for Women Affairs, Barrister (Mrs.) Ukel Oyaghiri, said they have come to express appreciation with the way the police conducted the affairs during the elections.

“Rivers women have come to express our displeasure on the delay to announce the Rivers State election results. All other States have had their results announced with winners emerged and even court injunctions that had to do with stoppage of election process in every other states have been vacated.

“But in Rivers state where the election took place and collation has been done, INEC has refused to announce the results, and this has put all women in suspense.

“As women, who have passed through thick and thin in course of the election, we cannot keep quiet over the delay in announcing the results”, she said.

She further urged the INEC Chairman, Professor Yakubu Mahmood, to ignore calls from enemies of the state for the removal of the state INEC REC, Oboh Effanga.

The women alleged that the All Progressives Congress (APC) has planned to disrupt the collation and announcement of governorship results in Rivers State, scheduled for April 2-5, 2019.

On their part, the anti-Effanga women group demanded the immediate transfer of the REC, Obo Effanga, out of the state.

The protesters led by a civic group, All Female Initiative for Leadership and Empowerment, also demanded the outright cancellation of the electoral process, adding that the collated results have been tampered with.

Carrying inscription such as “Obo Effanga must go” converged on Aba-Port Harcourt road office of INEC, where they were received by the commission’s representatives, the women alleged that Effanga has been compromised to deliver the result of the polls in favour of candidates of the Peoples Democratic Party (PDP) in the state.

Speaking, the leader of the protest, Ms. Gulu Amakiri, stated that the people of the state have lost confidence in Effanga, calling for his immediate transfer out of the state.

She stated that if the commission failed to transfer the commissioner, Effanga, and goes ahead to announce the result of the polls that women in support of youths would shut down the state.

However, INEC’s Head of Voter Education and Publicity in the state, Edwin Enabor, while receiving the group, said their message would be communicated to the national office.

Enabor stated that officials from the national office in Abuja would be commissioned to complete the process, adding that Effanga would not be the one to conclude the collation.