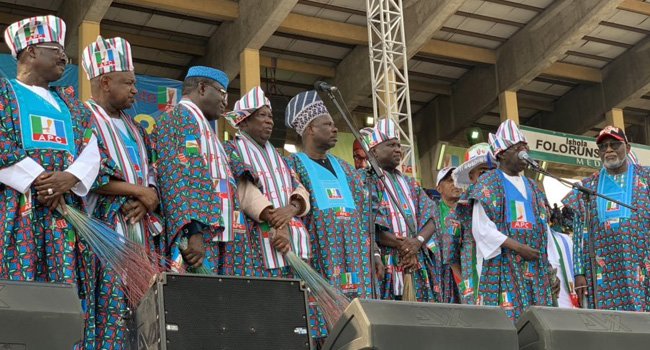 National Leader of the APC, Chief Bola Tinubu, on Saturday, charged prospective voters to cast their ballot for the APC in the forthcoming election.

Tinubu, addressing the mammoth crowd of supporters at the Teslim Balogun Stadium, Surulere, Lagos, venue of the party’s Presidential campaign, said that the opposition in 16 years failed to put Nigeria on a pedestal of growth despite enormous resources. He said the Buhari administration had done a lot with meager funds and resources just in four years.

“Today is a demonstration of democracy and it is not all about President Muhammadu Buhari. Lagos is very sure for voting Buhari and APC largely in the next election.

Tinubu also described ex-President Olusegun Obasanjo as the greatest election rigger in the history of Nigeria.

“When he was asked Umaru Musa Yar’Adua admitted that the election which brought him into office was rigged,” he said.

“Who conducted that election?” he asked and the crowd chorused “Obasanjo”

Continuing, Tinubu said “Obasanjo is the greatest election rigger in this country.”

He also said Buhari, in his campaign in 2015, made promises which he had fulfilled since he assumed office.

Tinubu noted that if the opposition had been dedicated to power generation in their 16-year rule, investors that left the country before 2015 would have remained in the country.

“When I was governor of Lagos State for eight years, I introduced an industrial power generation system.”Obasanjo and Atiku opposed it, I went to court and with the help of Prof. Yemi Osinbajo, we won.

Tinubu also sensitized the people on how to cast their votes on election day, saying “today, I want to teach the opposition a lesson”.” Vote appropriately in the ballot paper for the APC and avoid your vote been void.” Use your index finger instead of your thumb, and ensure you wait till the votes are counted.

Earlier, Gov. Akinwunmi Ambode of Lagos State reiterated the commitment of the state to unalloyed support of President Buhari

“We appreciate the President in the last three and half years. The 2019 election is not about tribe and religion, but it is all about job, economy, and infrastructure.”In Lagos, Airport road is making life comfortable for every Lagosian. PMB has refunded some of the money we used for projects in Lagos.”We need to continue in that direction. PMB has created ground work for growth”.