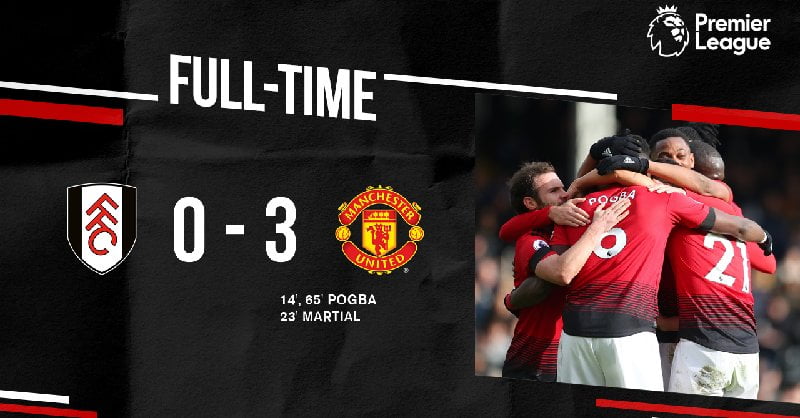 Manchester United moved into the top four of the Premier League table with a 3-0 victory over Fulham at Craven Cottage earlier today.

Two goals from Paul Pogba and a superb solo effort from Anthony Martial secured a comfortable win for the visitors, their 10th in 11 matches in all competitions under caretaker manager Ole Gunnar Solskjaer.

United, who kept player-of-the-month Marcus Rashford on the bench as they made six changes from the 1-0 win at Leicester City, were rarely troubled by a Fulham side who have now lost 23 of their last 24 league meetings with ‘big six’ opposition.

Meanwhile, Both teams have some big tests coming up. It doesn’t get any easier for Fulham at Craven Cottage: their next three guests will be Chelsea, Liverpool and Manchester City! United meanwhile prepare for a tricky triptych of their own: a Champions League tie against PSG, an FA Cup match at Chelsea, and the visit of Liverpool in the league. They do so from a good place: they’ll stay in fourth unless Chelsea get a point at City tomorrow afternoon.