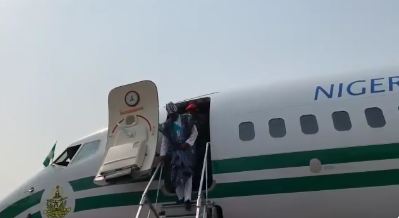 Naija News reports that the President touched down at the Murtala Muhammed Airport a few minutes ago.

The President’s Personal Assistant on New Media, Bashir Ahmad made this known on the micro-blogging site, Twitter.

In a related development, governorship candidate of the Peoples Democratic Party (PDP) in Lagos state, Jimi Agbaje, has described the removal of heavy-duty vehicles from highways due to President’s visit to the state as “hypocritical and wicked”

Naija News recalls that trucks, which had littered major roads in the state and hindered the free flow of traffic, were evacuated few hours to President Buhari’s visit for the APC Presidential campaign.

Speaking at a town hall meeting in the state on Friday, the Lagos PDP governorship candidate said the government knew the solution to the incessant traffic jam on major highways but had decided to punish residents of the state.

Agbaje said refusing to take the appropriate steps before the president’s visit shows that the state and federal government do not care about the welfare of the people.

The Lagos PDP governorship candidate promised to improve the traffic situation in the state if elected as governor.

His words: “Have you noticed that there is no traffic jam in Apapa today?” he asked.

“It means that these people are wicked. It means that they are hypocrites. They have refused to clear this traffic all this time, even when they knew they had the solution. So because President Muhammadu Buhari is coming tomorrow, they have cleared the traffic. So when he leaves, they will punish us again.

“We are saying that the traffic situation in Apapa becomes a priority. I am an Apapa person. I stay in Apapa. I work in Apapa. As Governor, I will ensure that this punishment will stop,” Agbaje said.