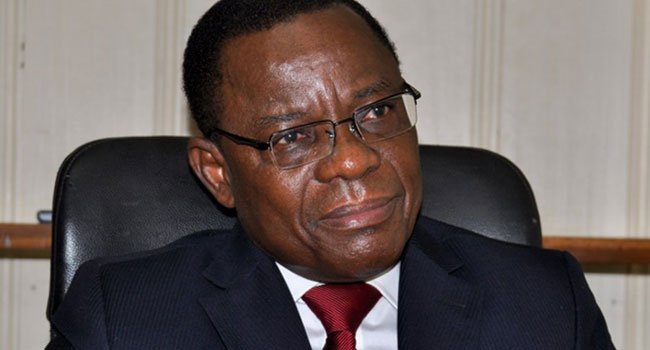 Cameroon opposition leader Maurice Kamto, who claims to have been cheated out of the presidency in elections last year, was arrested in the country’s economic capital Douala on Monday, a senior party member said.

The main opposition leader Maurice Kamto in Cameroon has been arrested by the brutal regime Dear Jeremy on Paul Biya. This happened after the peaceful march protesting against the recent rigged elections in Cameroon. Please intervene for his immediate release Dear Jeremy.

Naija News understands that the arrest is the latest political turbulence to hit the West African country and comes after several recent eruptions of violence over the October vote, which saw Kamto come second behind Paul Biya, who has ruled for more than three decades.

“Mr Kamto was arrested at the home of (supporter) Albert Dzongang,” said Emmanuel Simh, vice-president of the opposition Movement for the Rebirth of Cameroon (MRC), confirming information from a source in Douala.

Following Kamto’s arrest, around 300 people gathered outside Dzongang’s house, according to a Nigeria News reporter, flanked by about 50 police officers. Shots were fired into the air to disperse the crowd. The authorities did not respond to a Nigeria News request for information.

Veteran leader Biya won a seventh consecutive term in the October election, which was blasted by the MRC as an “electoral hold-up”.

Kamto, who has continued to claim he was the rightful winner, won 14.23 percent of the vote to place second, according to the official figures, but his party has held sporadic protests since then to dispute the result.

On Saturday 117 people were arrested during protest marches in several towns.

#Cameroon opposition leader #Kamto arrested for protests. Presidential election results have been contested by the 2 leading opposition candidates. And Kamto has managed to mobilise his MRC supporters to take to the streets to denounce the electoral hold up.

The MRC was holding a crisis meeting late Monday in response to the arrests, Simh told Nigeria News, adding that Dzongang and Christian Penda Ekoka, an economist, were also arrested in Monday’s police raid. Kamto’s former election campaign head Paul-Eric Kingue and rapper Valsero were among those detained over the weekend.

The Cameroon government has looked to dissuade Kamto’s party from demonstrating, claiming that the opposition leader was an “outlaw” for not accepting the election results.

In France dozens of protesters broke into Cameroon’s Paris embassy on Sunday, vandalising portraits of Biya, according to witnesses. Police forced them out of the building two hours later and onto the street, where they continued their protest outside the embassy.

Biya has ruled the West African country since 1982 with support from the army, government administrations and the Cameroon People’s Democratic Movement (RDPC) that he created in 1985.

"The only time men of dignity are in jail is when the government is made of criminals"#FreeMauriceKamto#FreeAllArrested pic.twitter.com/SkgQ7gdyvS