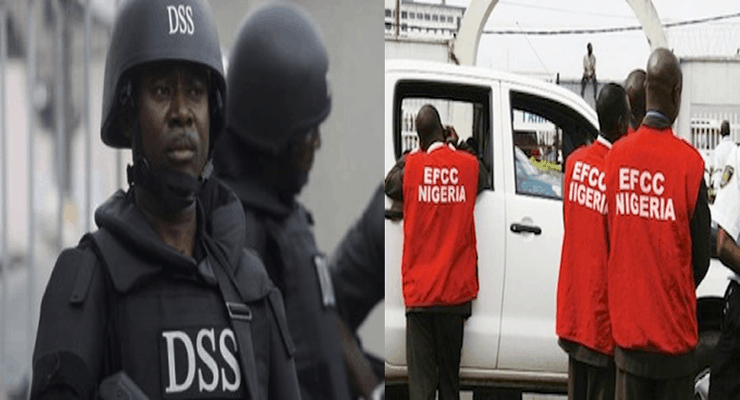 A renown human rights Activist and Chairman, Civil Societies Coalition
for the Emancipation of Osun State (CSCEOS), Comrade Adeniyi, Alimi
Sulaiman has dragged the State Director of the Department of State
Security Service (DSS) and two of its Officers before the State High
Court for alleged plan to obstruct the investigation of the Economic
and Financial Crimes Commission (EFCC) on the allegation of financial
impropriety levelled against the immediate past State Attorney-General
and Commissioner for Justice, Mr Ajibola Bashiru.

However, the Director-General of the Security Service had begun the
investigation into the allegation of compromised and complicity
levelled against its State Director and two Officers on the subject
matter.

The group had earlier forwarded a Petition Letter dated Wednesday,
19th December 2018, with the titled; “The petition against Osun State Director of
(SSS) and one of his officers, Mr. Kunle Shofola with phone number
(08168933030) over conspiracy with Osun ex-commissioner, Mr. Ajibola
Bashiru and his lawyer by planning to obstruct the EFCC investigation
on the alleged illegal acquired N2.2billion properties with public
funds and plan to illegally arrest the EFCC complainant and
Chairman,Civil Societies Coalition for the Emancipation of Osun State
(CSCEOS) as a way to sabotage the effort of the anti-graft agency and
President Muhammadu Buhari on the war against corruption”, to the
Director-General of the Security Service for necessary action on the
erring officers.

In a suit filled by the Counsel to the Applicant(Sulaiman), Barrister
Adedore Adedokun, urged the Court to restrain the security service from
arresting the applicant.

According to the Originating Summons of the suit, requesting from the
Court that; “The continuous hunting and threat of arrest of the
Applicant on a false complaint by the Respondent and his agents is
contravention of Fundamental rights to personal liberty and right to
freedom of movement as guaranteed by sections 35 and 41 of the 1999
Constitution of the Federal Republic of Nigeria (as amended) Articles
5 and 12 of the African Charter on Human and People’s Rights
(Ratification and Enforcement) Act.

Sulaiman requested the Court to grant him an order of perpetual
injunction restraining the Department of State Security Service (DSS)
from arresting him on false Complain lodged to DSS by one Ajibola
Bashiru, the former Commissioner in the State.

Supporting his claims with deposed Seventeen (17) paragraph Affidavit
which he made in good faith on 20th December 2018.

The suit also alleged that the conduct and threat of the Respondent
against the Applicant has subjected the Rights Activist to
mental, psychological and physical torture and as well affected his
right to freedom of movement.

Sulaiman further said; ” Having noticed the intention of the
Respondents against him, the Law allows him to take step before they
are illegally arrested him as provided for in section 46 of the
amended 1999 Constitution.

“The Law bestows on every person resident in Nigeria, both high and
low, a right to go about his or her lawful business unmolested or
unharmed by anyone else, be it Government functionary or a private
individual and the Courts will frown upon any manifestation of
arbitrary power assumed by anyone over the life or property of
another, even if that other is suspected of having breached some laws
and regulations.

The legal practitioner submitted that the Respondent on behalf of
Ajibola Bashiru have breached the Fundamental rights of the Applicant
(Sulaiman) to personal liberty and freedom of movement by undermining
the Supremacy of the Constitution of the Federal Republic of Nigeria.