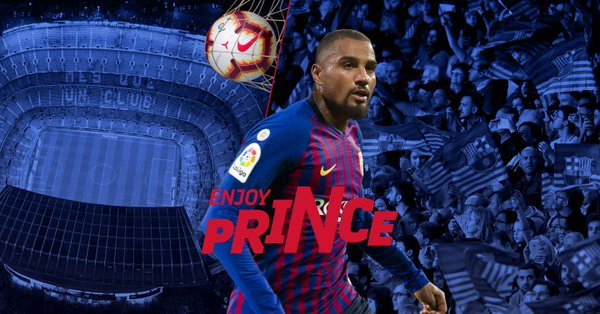 The transfer, Naija News understands, include a €8 million (£7m/$9m) option to buy, while Barcelona will pay a €2m loan fee for Boateng.

The 31-year-old player has been unveiled on Tuesday morning, followed with a private contract signing and a photo session on the Camp Nou pitch.

A press conference is also scheduled for noon UK Time.

A statement Barca’s official website on the transfer reads: “Kevin-Prince Boateng is a player who will surely adapt quickly to the team. With experience of playing in four of the biggest leagues in Europe, the Premier League, the Bundesliga, Serie A and La Liga, he is a man who has scored goals wherever he has been.

“Furthermore, Boateng is a player who versatile to a fault. During his time with Las Palmas with Quique Setién as coach he played as an out and out striker, a typical number ‘9’. However, he is also able to play further back as he did at AC Milan, scoring twice against Barça in his time with the Rossoneri.

“His ability to bring people into the game means he is excellent at playing behind the main striker.”

Boateng is now the second player to arrive at Barcelona during the current January transfer window, with the club having also signed Valencia defender Jeison Murillo.