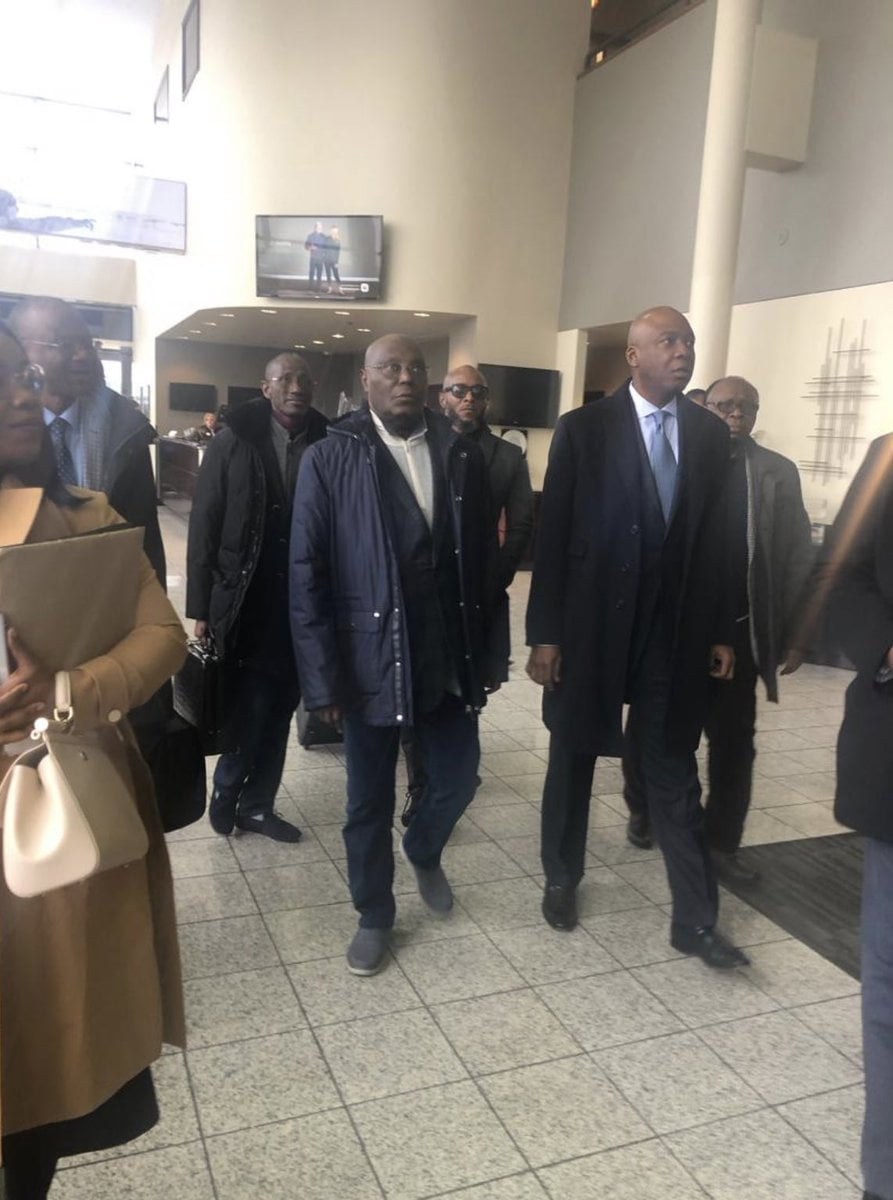 A storm of reactions by Nigerians has greeted Atiku Abubakar‘s visit to the United States after 13 years.

Naija News had reported that Abubakar, a former Vice President of Nigeria, arrived at “God’s own country” on Thursday, January 17, having departed Nigerian on Wednesday evening.
The visit came after the United States had in late 2018, issued the PDP Presidential candidate a visa.

Abubakar took to the micro-blogging site, Twitter to confirm his visit, saying he arrived at Washington D.C for meeting with US government officials and Nigerians living in D.C as well as the business community.

The FBI, a domestic intelligence and security service of the United States, had searched his residence in the posh neighbourhood of Potomac, Maryland, but no money was found.
The investigators had videotaped Jefferson, who was the congressman representing Louisiana, receiving $100,000 worth of $100 bills which he claimed was meant for Abubakar, but the PDP Presidential candidate has consistently denied the allegation.

Moments after it was confirmed that the PDP Presidential candidate has finally visited the US, Nigerians took to the micro-blogging site, Twitter to air their opinions on the visit with some mocking Buhari in the process while others said the visit is of no benefit to Abubakar ahead of the Presidential election.

#AtikuInAmerica is a wonderful development for @Atiku, however, once the Presidential election is over and he loses, his waiver expires and he won't be able to visit again… He might as well make the most of it while he's here…

We bring you LIVE action from Stamford Bridge AMERICA

While Lifeless FC is battling with Relegation at Ogboru "Presidential" Stadium Warri. #AtikuInUs

Atiku woke woke up in akure on Tuesday, drove to campaign stops in Ilesha, Osogbo, Ile-Ife all in Osun, went to Ibadan in Oyo and then flew to Lagos where he held several meetings.

And tonight we trend #AtikuInAmerica

Nigerians: #LGNWA with a President full of life.

The APC campaign was built around a huge cornerstone of "@atiku cannot go to the US."

I'm expecting this from e-APC tomorrow:
1. Atiku paid $100Million USD to lobbyists to enter USA.
2. Atiku/PDP lounge at Trump Tower Hotel to avoid arrest by FBI.
3. If Atiku lose he won't be able to go to USA again.
4. I don't know the technology use to enter US!#AtikuInAmerica

#AtikuinAmerica today is a traumatic day for children of hate and anger. ??? pic.twitter.com/5RWaYB4Z4m

Apparently the US is worried about Buhari’s admin, I wonder what the rest of the world thinks.
Atiku is in US to discuss a way forward; consider this our first sensible representation in the US market since 2015.
The other visit was a lifeless one.#AtikuinAmerica #LGNWA

This is not #AtikuInAmerica I don't know the kind of technology that was used here. pic.twitter.com/nsprgPqpBT

Kai, This laughter. It can pain oh!!! #AtikuInAmerica ?????? Kai… Alhaji Lai and his lying minions should check their blood pressure tonight abeg…?????‍♂️??‍♂️??‍♂️??‍⚕️??‍⚕️ pic.twitter.com/IdixETVPQD

Ah well, we won’t be hearing those “Atiku cannot go to the US” foolishness anymore. #AtikuInAmerica https://t.co/XkBItEpORJ

Hope you're okay? Just checking on you after #AtikuInAmerica trended. Please take heart and stay close to family members tonight.

What ordinarily shouldn't be a big has become a huge deal because of the brainlessness in the water they drink in Aso Rock.#AtikuInAmerica#AtikuInDC#LGNWA#AtikuMeansJobs pic.twitter.com/o5Pe2OLnyY

Where are all the APC people that wasted their time protesting at the US Embassy? ??#AtikuInUS pic.twitter.com/MWamagjez5