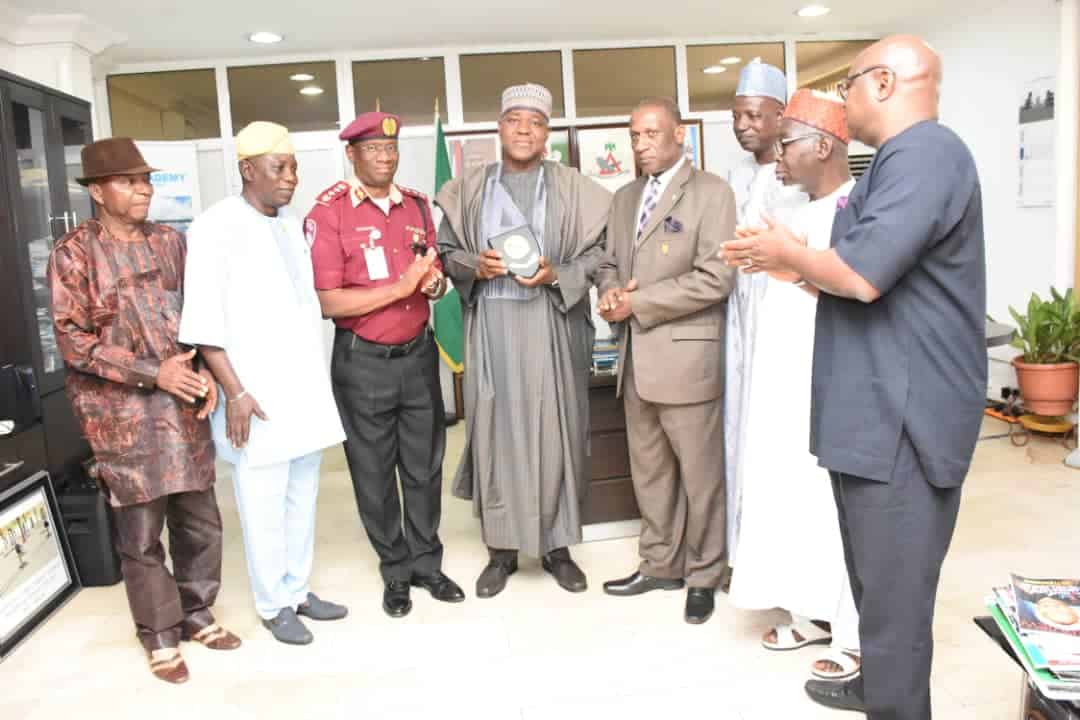 Speaker of the House of Representatives, Hon. Yakubu Dogara has commended the Federal Road Safety Corps (FRSC), over the introduction of digital technology, especially in driver’s license processing, with a drastic time cut for applicants.

The Speaker however expressed regrets that there is still high rate of loss of lives to road crashes across Nigeria, even as he promised that the FRSC establishment Act amendment Bill before the House would be speedily passed.

Dogara who was at the Corps’ headquarters in Abuja to renew his personal driver’s license, subsequently met with the Board and management of the FRSC where he described the technological deployment as “a pleasant surprise” but insisted that it can still be possible to see a situation where an applicant would just do biometric data capturing within minutes.

“Even though this is a pleasant surprise for me because I was just here for data capturing, and I thought I will just spend 2 or 3 minutes and I’ll be gone, but it’s all well because it’s in the national interest that we are having the meeting and I’m glad that we are working for the interest of our great country, and I’m happy to see this team-spirit playing out among members of your board”.

“In some other Agencies; we have had reports of how members of the board were fighting with the Head of the Agencies especially in the question of what is the delineation of the authorities of the board, but here you are working together seamlessly as I have seen among you; the spirit of comradeship, I must commend and I’m optimistic that things will definitely be better”

“I must also say that I am more than impressed by the infrastructure that I have seen here. I was just telling the Corps Marshal that if they had told me outside that we have attained this level of sophistication in terms of the deployment of technology, I wouldn’t believe it. If not because I’ve seen it, so even if I were Thomas, I’ve seen and touched it, and I now believe and know that truly we have made a quantum leap in terms of applying technology in order to better our lot here in Nigeria”.

“What you do here is very important, and that forms part of the mandate of governance in the protection/securing of lives and property of our citizens and I have seen the statistics of deaths on our roads, with the Corps Marshal saying an average of 93 lives are lost weekly, I think that is very high, even though it is commendable that by deployment of technology we have been able to crash the figures, I believe working together the way I have seen between the Board and Management, we can even do more, we can further cut this number, and we can achieve that in the nearest future”.

“If there is anything required on our part as Legislators, so that we can assist you to reduce this quantum of lives we still lose on our highways, it would be irresponsible of us not to do it immediately. Just as you all know, the Laws have processes, from when they are Passed for them to be Constitutionally valid, it must Pass Three different Readings. As it is now, we have had up to the Second Reading, part of the Second Reading process is that it must pass through a Public Hearing process, so that we can get the public buying into the Law, it is important since we are Representatives of the people, we want to hear their opinion as to the proposal that is being laid before Parliament. So as soon as that Public Hearing process is concluded, we can fast-track the remaining process which is consideration and adoption of the Report, Third Reading and Passage. Since I see what you are doing, I can only plead that we hasten the Public Hearing, and between the Chairman of our Committee and the Corps Marshal, this can be done as quickly as possible, maybe by December in order to avoid the situation which the Chairman was referring to. If care is not taken, once the lifespan of this Parliament elapses, we have to start ‘denovo’, and that would be very unfortunate., because you’ll have to present it and give the required notices before you start the Reading processes again”

“I think working together, nothing is impossible, especially from the perspective of the House, I cannot speak for the Senate, once the Public Hearing is done, all I need is a word from the Chairman that we are done with the Public Hearing which is a Constitutional requirement as we must get the input of our citizens before the Law is Passed, then leave the rest to me, we’ll be done with it. Since we work in the same environment with the Senate, we’ll try and interface with the Senate. I’ll share personally with the Senate President what I’ve seen here today and tell them of the urgency in order to better the Laws that regulate workings of the Agency which will translate into saving lives on our highways”.

“I want to thank you and commend you for the wonderful work you are doing on behalf of all of us, and to thank God for the spirit of unity that I have seen and to encourage you to sustain this because without unity you can’t achieve anything as is said: United we stand, divided we fall, and because we are human beings and nobody is perfect, you will always have grievances coming from one corner or the other. But if you realize that we are all human, and you yourself are not perfect, then you should allow some room for people you are dealing with to exhibit their human trait of imperfection, that no one can get it 100%. Once you realize that, you’ll be able to tolerate people and be able to work together for the success of this Agency which will translate into the saving of lives on our highways. Thank you for this opportunity and God bless us all”.

Chairman, Governing Board of the FRSC, Mallam Bunari Bello earlier in his remarks appealed to the Speaker to help ensure the amendment Bill to the Corps’ extant Act is passed and enacted before the expiration of life of the current National Assembly”.

“We are urging you to assist us get the Law Amended so that it can become operational within the life of this National Assembly, because if we do not achieve it now, we have to start all over again. I really think we should device a way of getting it done without starting ‘denovo’. This is because it can be very frustrating when you spend 5 years prosecuting a case and either the Judge retires or it goes to the Court of Appeal, and you have to start again, and some times you see some of the witnesses die in the process and that has destroyed the whole work done”.

“I think we should find a way for the National Assembly to dispense of it without us having to start all over again. I believe with your support we can get it done within the life span of this National Assembly, and I think it is something which would be kudos to the National Assembly if this is passed as it is definitely to impact on the lives of millions of Nigerians and those who are not Nigerians”, he said.