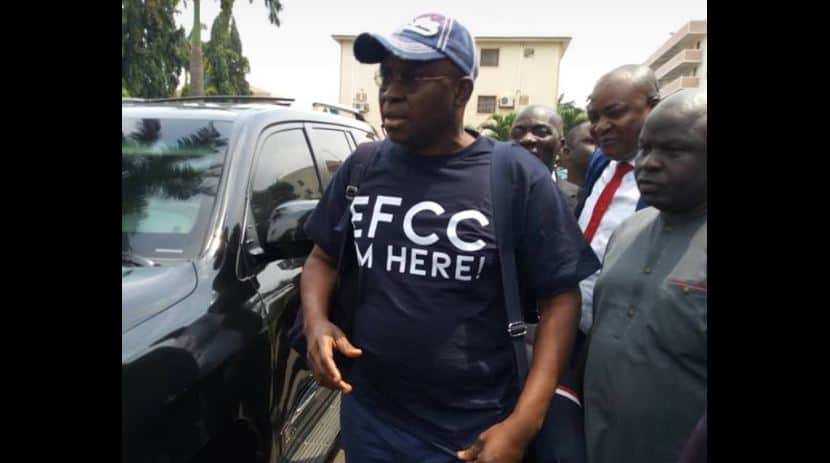 Why EFCC Still Has Fayose In Its Custody

The ex governor who reported at the EFFC office in Abuja on Monday is also being detained for allegedly retaining a part of the money which he reportedly received from the office of the national security adviser (ONSA) during the past administration.

He allegedly received the money in the build-up to the 2014 governorship election in Ekiti, through Musiliu Obanikoro, a former minister of state for defence.

He was said to have been grilled for hours by a special investigative panel, in the company of Mike Ozekhome, his lawyer.

Vanguard quoted an EFCC source as saying: “Fayose has a lot of issues to clear with us and we hope he can clear them on time. He is to write a voluntary statement on all that he knows about the N4.7 billion that he allegedly received from the former Minister of State for Defence.

“Interrogators also confronted him on the choice property he allegedly used funds to acquire in Lagos, Abuja and other places and the allegation that he collected kickbacks from some contractors.

“Apart from fraudulently retaining the sum of N1, 219,490,000 being part of the N4.7 billion stolen from the treasury of the federal government through the Office of the national security adviser, the applicant (Fayose) has also received gratification in form of kickbacks from various contractors with the Ekiti state government such as Samchese Nigeria Ltd, Tender Branch Concept Nig. Ltd, Hoff Concept Ltd and Calibre Consulting Ltd.

The source added that some of the properties which Fayose allegedly acquired with the funds received have been marked for seizure.

“There are so many issues for which Fayose must provide answers to our interrogators. These things take time and he should know that it is beyond fanfare but being honest and providing answers to the issues,” the source was quoted as saying.

Recall that Naija News had reported the EFCC  had begun investigating Fayose and his associates, including his wife, over the fraud allegations.

The EFCC had also said it will reopen its case file on the governor over the Integrated Poultry Project Biological Concepts Limited N1.3bn “fraud”.