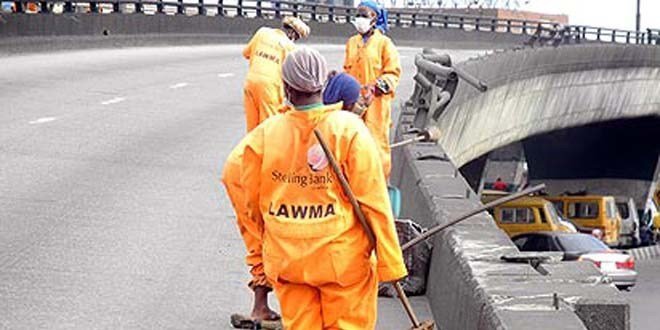 LAWMA street sweepers
The Action Democratic Party (ADP) in Lagos state has called on the Governor of Lagos State, Mr Akinwunmi Ambode to immediately attend to the several months of unpaid Salaries of Street sweepers who stormed the state capital in protest today.
The party in a statement issued by the Lagos State Publicity Secretary of the Party, Prince Adelaja Adeoye, noted that the way and manner at which the street sweepers are being treated by the Visionscape and Lagos State Government is unfair.
According to ADP, Governor Ambode allegedly pulled down the effective PSP service that had tried to keep Lagos Environment clean and replaced it with Visionscape that it services has repeatedly failed to improve the environmental outlook, waste management and disposal system of the State even with all their bogus sophistication.
ADP said, since Visionscape came on board, allerging that dirt has littered the entire state, while the workers they engaged to help take the garbage off the streets are being owed several months of salaries, with no payment of hazard allowance, or provision of basic working tools and other benefits.
The party said, it was shameful that the street sweepers had to protest at Alausa, State Capital today, to show their displeasure, stressing that the peoples welfare should be the utmost concern of the government, ADP said with the resources available to the State government, that the people engaged to make the state cleaner should not be owe one kobo. Speaking for other civil servants in the state, the party said Lagos State government should pay up all the outstanding salaries of workers.
ADP said that it is inhuman the way the street sweepers are being tossed between Visionscape and Ministry of Environment for their payment, that government should not allow innocent workers to suffer untold hardship for rendering service to Lagos State.
The party said since Visionscape has failed to make Lagos cleaner, but rather subjected it to a more filthier environment which can lead to outbreak of contagious and viral diseases, ADP charged the Lagos State government to revert back to the former PSP waste management and disposal system. The party said that the public cannot feel benefit of billion of Naira investment of the State in the so called Visionscape project.
ADP said waste management should not be a big deal because as part of its plan for Lagos is convert waste into to energy, which will create more power and employment for Lagosians. The party also said that, it will come up with effective waste management and disposal system to ensure that Lagos is not frequently littered as it is today, to mitigate against possible outbreak of any kind diseases, urging the state government and it’s appointed agent Vision Scape to immediately settle all the salaries and other benefits accrued to the street Sweepers.