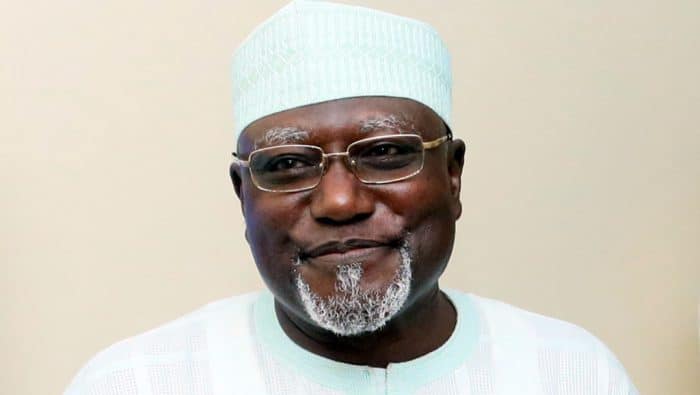 Source Confirms That Buhari Is Never Reconsidering The Reinstatement Of Daura

The media also reported that there has been pressure from some forces, including members of his kitchen cabinet, some of the lobbyists, reportedly trailed the President to London to mount pressure for the reversal of Daura’s sack.

Naija News recalls that Daura was relieved of his duties by Vice President Yemi Osinbajo who was then the Acting President.

Those against the ex-security chief’s return argued that his sack saved the nation’s democracy and boosted the Buhari administration’s democratic credentials, while some favoured his retention noting that his judgment was too quick.

The battle has since shifted to the Presidency, over the search for a new Director-General. Some favour the retention of the office in the North. Many want acting DG Mathew Seiyefa to be confirmed to prove a point that the President has a national outlook.

The argument for Seiyefa is borne out of his having less than one year to retire. He has spent 34 years in service. A source, who spoke in confidence with The Nation, however made it clear that Daura is never returning as DSS Boss.

In his words, “The forces pushing for Daura’s reinstatement have lost the battle because the President has foreclosed his return.

“The President has no plans to bring back Daura under any guise. He believes this administration is one and will not overrule his deputy. He is a man of discipline and not an ethnic bigot.

“What happened is that some ministers, a few kitchen cabinet members and influential people close to the President sneaked into London to meet with Buhari to overturn Daura’s sack.

“They alleged that Prof. Yemi Osinbajo sacked Daura before informing the President who was on vacation, said the source, who added:

“They were not aware that the President and the Vice President had discussed the fate of Daura and some security chiefs at least two weeks before the President proceeded on vacation in London. The two leaders had agreed on the need to effect a few changes.

“Osinbajo acted in line with the template set by his boss and acted appropriately.”

During Buhari’s stay in London, it was learnt that  “a former Head of State and a minister in the kitchen cabinet advised the President to ignore these influential forces pushing for Daura’s return in view of the democratic mileage the administration scored with his removal after the unauthorized invasion of the National Assembly by hooded DSS operatives.

“The ex-Head of State warned on the diplomatic and international implications of reinstating Daura. The Minister also minced no words in confronting those who wanted the ex-DG back in office.”

A source in government also gave insights into Daura’s removal. According to the  source, “while it is true that the Vice President sacked Daura before informing the President, it was in line with the earlier decision by the two leaders to tinker with the security apparatchik. “There was a template which the President would have worked on after the vacation which Osinbajo implemented.

“So, when Daura acted against democratic norms, he was invited to the Presidential Villa by the Acting President.

While seated in a part of Osinbajo’s office, waiting to see the VP, “He was then escorted out of the back exit of the VP’s wing to a safe house for debriefing. There were no altercations in any manner between the VP and Daura.”

On Daura’s replacement,  a security source hinted: “It is either the retention of Seiyefa or appointment of a new person as the substantive DG. For Seiyefa, who has less than a year left in service, this is the second time, he will be closer to clinching the job.”

Seiyefa In 2010, lost to former DG Ita Ekpenyong, who was said to have been preferred by former President Goodluck Jonathan. Some “forces” are said to be pushing for a northern candidate to succeed Daura, but others in the kitchen cabinet have made a strong case for Seiyefa to prove a point that Buhari has a national character contrary to the accusation by some politicians that he is an ethnic bigot.

READ ALSO  Biafra: What Buhari Must Do To Nnamdi Kanu's IPOB - Sheikh Gumi

“Seiyefa and three other Deputy Directors-General in the DSS are eminently qualified for the job. But Seiyefa is the most senior and for a service where hierarchy matters, he is first among equals,” the source said, noting however that “if Buhari goes out of the service to pick a new DG, it might lead to his exit and that of other three Deputy Directors-General”.