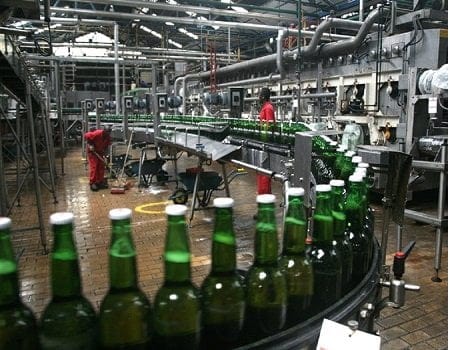 President Muhammadu Buhari in the company of other eminent Nigerians, will be inaugurating International Breweries Plc’s $250m brewery next week Tuesday.

Mr. Tony Agah, the Plant Manager, made this known to Journalist on Monday during a media tour of the brewery located at Km 3 Flowergate Industrial Scheme, Sagamu-Abeokuta Expressway, Ogun State.

The International Breweries Plc has an affiliation with the largest Brewer in the world AB InBev Group.

The Manager listed Governor Ibikunle Amosun, Minister of Industry, Trade and Investment Okechukwu Enelamah; and the global chief executive officer of AB InBev, Mr. Carlos Brito, and others as some of the eminent individuals that would grace the unveiling ceremony.

This new plant is in addition to the three other plants in Ilesa, Onitsha and Port Harcourt, own by IB Plc.

While Agah explained that the new plant is one of the Foreign Direct Investments which came into the country in the last two years, he added that the first phase of the development of the plant had been completed with over 300 Nigerians already employed.

According to him, more indirect employment will be created as the plant commence operation.

He said, “Given the importance of this event, the President and Commander-in-Chief of the Armed Forces, Federal Republic of Nigeria, Muhammadu Buhari, is expected to perform the inauguration of the facility.

“The governor of the state, Senator Ibikunle Amosun, will be hosting all of us, as our landlord. Other eminent Nigerians and officials of AB InBev, especially the global CEO, Mr. Carlos Brito, will lead the celebration.

“The new brewery will be the company’s largest plant within the group in Africa outside the one in South Africa. This will have a significant multiplier effects on the value chain within Ogun State and its environs.

While speaking about the inauguration, Annabelle Degroot, IB Plc Managing Director, described the plant as a major step towards the company’s strategic goal of producing high-quality drinks locally.

“International Breweries Plc is a brand that places a premium on quality. Bearing this in mind, we will spare no expense or effort in ensuring that Nigerians are treated to the best traditions in brewing, with outstanding recipes, superior ingredients, innovation and world-class techniques.” he said.