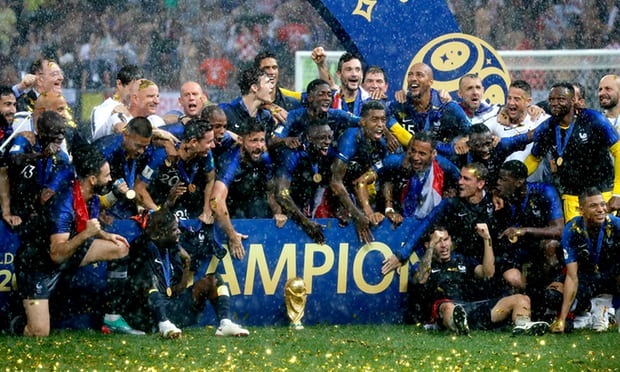 The 2018 FIFA World Cup In Russia has come to an end with outstanding France recorded their second world cup trophy in the history of the country with a 4-2 victory over Croatia.

The 1998 winners were one of the favourites from the onset, but not all favourites reached this stage, and they were up against a pre-tournament underdog in the final match.

Croatia showed itself a worthy opponent has

Despite Croatia having the majority of possession in the opening stages, France took the lead in somewhat fortuitous circumstances. Antoine Griezmann’s lofted free kick from the French right was nodded into his own net by Mario Mandzukic.

Ivan Perisic pull one back for Croatia ten minutes after the first to level the game, making it his third goal of the tournament to draw his team level with a powerful shot 10 minutes later.

A cross from the French right-hand side was handled by the Croatia No4, with a penalty awarded after a VAR review.

his third goal of the tournament to draw his team level with a powerful shot 10 minutes later.

This was after France had failed to clear a Luka Modric free-kick, but more than that failure was the fact that Croatia were deadly in patiently waiting for their chances.

However, because it was already clear that it was going to be a day Croatia would have many things go against them, Perisic was then responsible for conceding a penalty kick which Antoine Griezmann converted.

Croatia fought back hard but they could not b reak down the French wall, perhaps out of tiredness from having played extra time in their last three games.

Mandzukic later benefitted from goalkeeper Hugo Lloris’ error to cut the deficit in the 69th minute to make the game the highest-scoring World Cup final match over 90 minutes in 60 years, since Sweden’s World Cup.

France coach Didier Deschamps became the first person to win the World cup both as a player and as a coach.

19 years old Kylian Mbappe became the second teenager to score in the world cup finals 17-year-old Pele for Brazil scored against Sweden in 1958. He also went home with the youngest valuable player of the tournament.