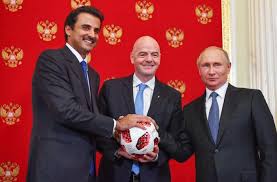 Russian President Vladimir Putin on Sunday handed over mantle of the World Cup host to the emir of Qatar whose country will stage the 2022 edition of the tournament. Photo: Reuters.

After successfully hosting the 2018 FIFA World Cup, Russia, through her President, Vladimir Putin on Sunday, handed over mantle of the World Cup host to the emir of Qatar whose country will stage the 2022 edition of the tournament.

Qatar, with 2.3 Million people and one of the smallest in the world, accepted the mantle to host the competition in four years time from the biggest country in the world in Landmass.

Qatar’s size, as well as its broiling temperatures and lack of ready stadium infrastructure, have prompted some to question the decision by FIFA, soccer’s world governing body, to make it host.

Qatar’s rulers, however, say they will rise to the challenge, with hours to go until the final between France and Croatia that will bring down the curtain on Russia’s hosting of this year’s tournament.

Putin, at the ceremony, appreciated footballers and fans alike for the successful competition.

“Russia is handing over the relay baton for hosting the FIFA World Cup to Qatar.

“We are proud of what we did for fans of this wonderful sport.

“We ourselves, the whole country, got an enormous amount of pleasure from interacting with soccer, with the world of soccer and with the fans that came here from all over the globe.

“I’m sure that our friends from Qatar will be able to host the 2022 FIFA World Cup on the same high level.

“We are, of course, ready to share the experience we acquired in hosting the World Cup this year along with our friends,’’ the Russian President said.

The peak of the hand over ceremony saw Putin hand over the world Cup ball to FIFA president Infantino, who then handed it over to the emir.

The Qatari leader assured that his country would do all it can to make a success of the 2022 World Cup.

“We hope to overcome all the difficulties,” he said.

He added that the Qatar National Team would surpass the success of the Russian National Team, by exceeding the quarter-final stage.

“Though it will be hard to repeat that success as we are a small country, but we are very keen on sport,’’ he said.