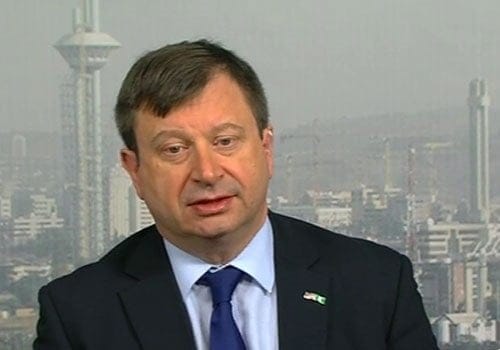 Ondo State governor, Rotimi Akeredolu on Thurdays, revealed that the mining and exploration of bitumen in the state would commence before the end of the year.

The governor made this known while hosting the British High Commissioner to Nigeria Amb. Paul Arkwright, who paid the him a courtesy visit.

According to NAN, Irele Local Government Area of Ondo State boast of the second largest Bitumen deposit in the world and the largest in Africa.

He added that the Ondo State Government on July 18, 2017, received a mining license by the Federal government to exploit.

The government noted that Southwest Bitumen Company would soon debut on the site, while the equipment for mining is presently being shipped into the country.

Akeredolu said that the revenue generated by the state can be improved on when economic situation in the state blossoms.

“We are trying and the IGR has improved a little, but it could still be better. We will make the best of what we have.

” Ours’ is a civil service state. We are just trying to bring in one or two industries to shore up our IGR,” he said.

Arkwright, who spoke earlier, said the governorship election scheduled to hold on Saturday in Ekiti State must be free, fair, peaceful, credible and acceptable to all.

He disclosed that the British Hight commission in Lagos and Abuja would be sending a large delegation to observe the July 14 Ekiti Election.

He admonished security agencies to ensure residents of Ekiti were protected before, during and after the election.

“Security personnel have the responsibility to ensure the safety of lives of every citizen of the state.

“Citizens of the state should be allowed to freely vote according to their conscience for any candidate of their choice and their votes must also be made to count.

“We do not support any political party, but we do support a credible process and we are here to observe that,” he said.

The Ambassador who hinted that he was in Ondo State to get exposed to the many economic opportunities in the state.

He added that Job creation, especially for the youths, would go a long way in developing the state and boosting its economy.

“More young Nigerians are fast coming up into the job market, so creating jobs and investing in employment opportunities for them is a priority for me.

“Bringing British expertise and companies into the state are also ways to help reduce the rate of unemployment in the state and the county at large,’’ he said.

Arkwright further stated that the British government is willing to assist the state in reviving the lot of Cocoa production in the state.