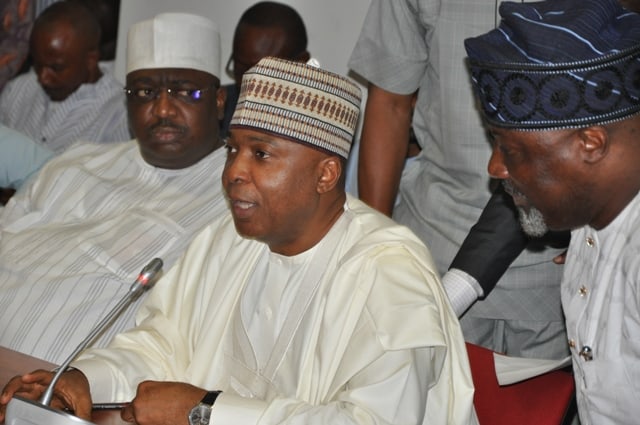 Senate President, Dr. Bukola Saraki, today denied any reports his meeting with members of the nPDP and Vice President, Yemi Osinbajo contained discussions about his trial at the Code of Conduct Tribunal, CCT.
According to him, the issue of CCT and that of Supreme Court were never discussed at the meeting.

Yusuph Olaniyonu, Saraki’s Special Adviser, Media and Publicity, in a statement said “The attention of the Senate President, Dr. Abubakar Bukola Saraki, has been drawn to the front page headline in the May 30, 2018, edition of The Nation newspaper – ‘Ex-nPDP: stop Saraki’s trial’. The body of the story was contained on Page 6 of the newspaper.

“Ordinarily, Dr. Saraki would have ignored the story as he has done in the cases of other speculative ones concerning the on-going discussions between the new People’s Democratic Party (nPDP) and the All Progressives Congress (APC)-led Federal Government published by the newspaper, but since this story specifically mentioned an issue concerning him and the newspaper is associated both in ownership and viewpoint with a section of the APC leadership, it may be perceived to have some level of authenticity.

“The trial of Dr. Saraki over asset declaration issues which is now before both the Supreme Court and the Code of Conduct Tribunal (CCT) was never part of the discussions over the grievances of the nPDP leaders and all those who attended the meeting with Vice President Yemi Osinbajo can attest to this. The issues being discussed between the nPDP and the APC leaderships are beyond personal matters.

“Dr. Saraki will want it known that he is not interested in any settlement of the asset declaration case outside the judicial process. He is confident that the court will give him justice and he will be exonerated of all charges as can be seen by the verdicts of the CCT and the Court of Appeal. In fact, he maintains his earlier position that the trial was politically and maliciously motivated.

“The Senate President’s only concern is that all interested parties should allow the judiciary to freely and fairly decide on the issues before it. Dr. Saraki believes in the rule of law, independence of the judiciary and ability of the court to adjudicate on all matters.

“The Senate President has consistently exhibited a strong belief that nobody should compromise national interest with personal issues. And this has guided his actions, conduct and utterances in the performance of his official duties in the last three years, despite the persistent persecution and intimidation directed at him.

“While urging Nigerians to ignore the speculations contained in The Nation’s story, Dr. Saraki maintains that there is no reason for him to depart from his avowed principle that the nation is greater than any individual, including himself.”