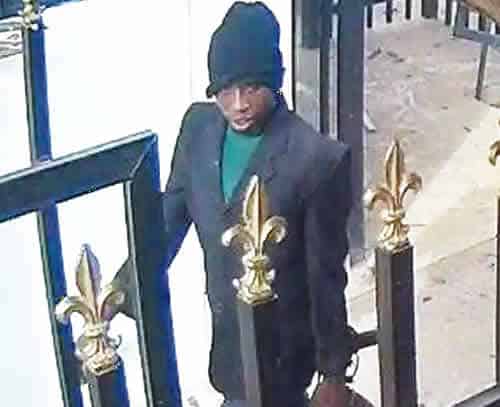 Police Arrest One Of The Suspects Linked To Offa Robbery Attack

One of the four robbery suspects, declared wanted for attacks on banks in Offa, Kwara State has been arrested by the Operatives of the Inspector-General of Police Intelligence Response Team.

Recall that Naija News reported that pictures of four members of the gang that attacked banks in Offa were put out for identification and declared wanted.

Michael Adikwu, the suspect was an ex-policeman, report has it that he was dismissed in 2012 by the Kwara State Police Command for allegedly aiding the escape of some robbery suspects.

Further information has it that until the dismissal of Adikwu, he was attached to the Special Anti-Robbery Squad (SARS) of the state command.

In respect to the 2012 crime committed by him, he was arraigned in the court and remanded in a prison, where he spent three years, before he found his way out and formed a robbery gang with others.

The DCP Abba Kyari-led IRT operatives, was reported to have arrested him on Tuesday in a town in Kwara State, the arrest was made possible because of the tip off from members of the public who saw Adikwu’s picture among those declared wanted.

Recall that a gang of robbers had stormed some banks in Offa on April 5 and killed scores of people, including nine policemen and reportedly carted away millions of naira during the operation which lasted for about an hour.

The Leaked Closed Circuit Television, CCTV, footage of the robbery saw the robbers blow up a security post of one of the banks as they there after brought out bags suspected to be containing money out of the premises.

ACP Jimoh Moshood, the Force Public Relations Officer, while releasing a statement on Friday, revealed the pictures of four members of the gang captured in the CCTV footage and declared them wanted with Michael Adikwu inclusive.

The source said the arrested suspect, Odikwu, was a police corporal and was dismissed from the Force in 2012 after his alleged involvement in the escape of some robbery suspects.

The source said, “He (Adikwu) was a SARS operative at the Kwara State Police Command. He used to fraternise with robbers. There was a robbery that happened in Kwara State about six years ago. The robbers killed somebody and escaped. The police were able to arrest those robbers.

“He collected money from those robbery suspects and released them. Later, the robbers were rearrested and they confessed that he aided their escape. He was arrested, tried in an orderly room trial and dismissed.

“He was charged to court together with the robbery suspects and was in prison for three years. He and some of the robbers were able to manoeuvre their way out of the prison and formed a robbery gang.”

Another source said a team of detectives got a lead that Adikwu was staying in a hideout in the state and swooped on him.

“The lead was given to the police by an informant. His hideout was cordoned off and he was arrested. He was apprehended by the IRT operatives in a community in Kwara State,” the source added.

DSP Ajayi Okasanmi, the Police Public Relations Officer, Kwara State Command, said arrests had been made, but he had yet to receive information on Adikwu’s arrest.

He said, “What I know is that the IRT team and the command are investigating the matter and have been making arrests. The Force PRO will come out with other information at the right time.”