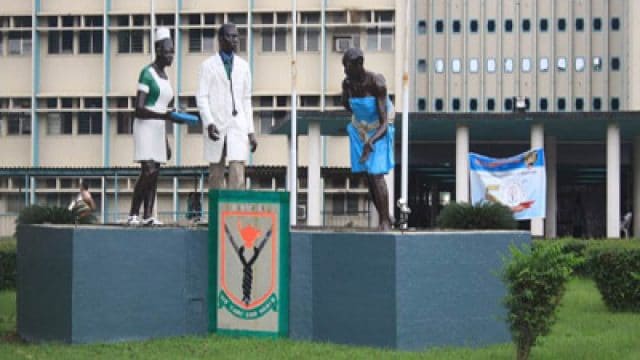 At the University College Hospital Ibadan, relatives of patients receiving treatment at the hospital have begun moving them to private hospitals.

Information obtained by Naija News has it that the number of patients at the wards has reduced considerably while the patients that are still in attendance could not be moved because of their conditions.

The strike of Joint Health Sector Union has led to the discharging of some patients by the hospital with nurses on strike and only doctors were in attendance to attend to the remaining patients.

The administrative offices, laboratories and all the clinics were shut.

Relatives of the patients that were moved from the hospital shared their grievances and complained of the high payment at private hospitals and the capability of their staff.

Ajao Adetunji, whose father had spent six weeks at UCH, said the patient was too weak but had to be moved.

He said, “We have been asked to go home but my father is very sick and cannot move. We had to wait for him to get a little strength; that is why we waited till today (Tuesday) before moving him.

He spent six weeks at UCH, getting treatment for kidney problem. We have to go to a private hospital now but my fear is the cost.

“Because of the nature of his ailment, we have been advised to go to a private hospital in Lagos but when we made enquiry about what it will cost to treat him, we were shocked at the figure. We have contacted a hospital in Ibadan and that is where we are taking him to.”

Deji Bobade, the Public Relations Officer of the hospital, said he was also locked out of his office.

He stated that the strike affected every department in the institution, saying that the UCH Medical Director, Prof. Temitope Alonge, had already traveled to Abuja on the issue.

Bobade said, “The strike is really taking its toll on the hospital and the management. As you can see, only the doctors are on skeletal duty because nurses who are to assist them are on strike. We only have some senior nurses on ground dressed in mufti to carry out some essential duties. The laboratories are shut. Even our administrative offices are shut, including my office.”