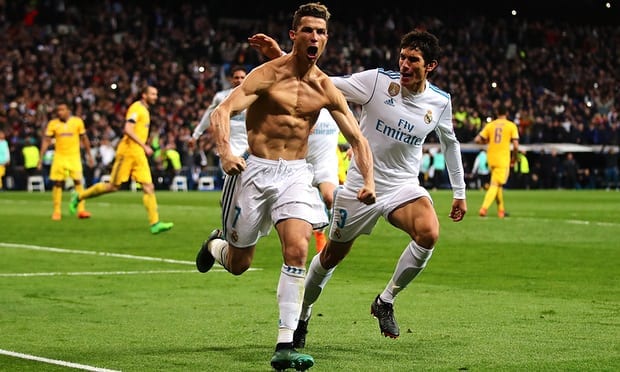 Juventus Came into the Second Leg of the Quarter-Final encounter against Real Madrid with the intention to create another upset in the UEFA Champion League as Roma did against the Spanish team, Barcelona during yesterday’s historic encounter.

Christiano Ronaldo‘s extra time goal was all Real Madrid need to escape Juventus‘ hunger for the Semi Final Ticket as Juventus scored three goals to cancel out the first-leg score and move to the brink of a sensational, historic triumph.

Real Madrid won the game on aggregate 4 :3 when Ronaldo stepped up and guided a spotkick beyond Szczesny and into the top corner when Vazquez went down after being pushed by  Benatia after Ronaldo nodded the ball back to him in front of goal.

Juve started the match with a dream to surprise the home team in the second minute of the game. Mandzukic jumped to guide an expert header into the net from five yards. Game on!?

The Second goal came For Juve when Lichtsteiner curled over a cross from the right and Mandzukic leapt above Carvajal at the far post and nodded into the net from six yards!

In the 59th minute, Juventus hit the third goal when Costa curled in a cross from the left. It should have been easy pickings for Navas but the goalkeeper dropped it at the feet of Matuidi,

Gianluigi Buffon was sent off for protesting. also Several Italian journalists were ejected from the Bernabeu press box after complaining about the remarkable late twist to this tie!