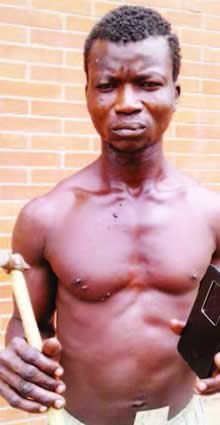 Robber who poses as drink seller nabbed by police.

The long arm of the law has caught up with a man who allegedly specializes in the robbing of motorists held in traffic in the Oshodi area of Lagos State, following his arrest by operatives of the Lagos State Task Force on Environment and Special Offences (Enforcement) Unit.

The suspect, Kayode Oluwole who is 27 years of age, allegedly disguises as a drink seller in the traffic and attack unsuspecting motorists who want to patronise him.

Robber who poses as drink seller nab by police.

The police in a statement released made it known that when his plan fails, the suspect usually resorted to force, using a hammer to break car glasses and robbing owners of their phones and other valuables.

He met his waterloo on Saturday after he allegedly broke the side screen of a Toyota Corolla and snatched two phones and a bag containing valuables from a woman.

The task force Chairman, SP Olayinka Egbeyemi, in a statement on Monday, said the suspect was apprehended by officials of the agency at Oshodi.

He said, “Immediately the suspect was arrested and every item stolen recovered, the owner was called on the telephone to pick up her bag and the two phones at the task force office. The suspect usually pretended as a drink seller.”

Egbeyemi added that the Lagos State Commissioner of Police, Edgal Imohimi, had directed that the suspect be charged to court.

Oluwole, who hails from Abeokuta, Ogun State, reportedly confessed to the crime in his statement to the police.

“I used the hammer to break the woman’s vehicle side screen because she refused to surrender her bag and two phones when I attacked her in the traffic,” he added.

The woman, Mrs. Hadizatu Jiddah, commended the operatives for prompt action which led to the suspect’s arrest and the recovery of her valuables.

Meanwhile, the head, public affairs unit of the task force, Taofiq Adebayo, said the state Commissioner of Police had directed the agency to embark on strict enforcement of the Lagos State Road Traffic Law 2012.