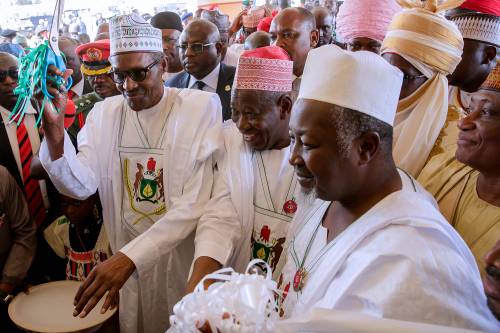 -Kano APC chairman says  “Security is important for everyone, not just for Borno, Yobe and Adamawa states”

Some members  of the All Progressives Congress (APC) in Kano state have said they would sue President Muhammadu Buhari if he does not plan to re-run for 2019 election.

The state chairman, Abdullahi Abbas and members of the executive committee of the APC in Kano, assured that they would obtain the nomination forms for President Buhari.

The APC senior officials expressed their opinion at a meeting held at the Kano government house on Thursday, while urging Govenor Abdullahi Ganduje of Kano to re-contest for 2019 governorship election.

Also present at the meeting were Hafiz Abubakar, deputy governor of Kano; Kabiru Gaya, Senator Barau Jibrin, a member of the house of representatives; all members of the state house of assembly and  44 party chairmen in all the local government areas of the state.

Abbas said: “Security is important for everyone, not just for Borno, Yobe and Adamawa states,” he said.

“It even more so for us as a commercial and industrial state. We are convinced that you are best for these times when the country has begun to muster energy and resources to develop agriculture, infrastructure and empower the younger citizens.”

While speaking, Governor Ganduje said the party was ready to coerce Buhari to accept the second term ticket.

Responding, Buhari said he understood the clamour of the ordinary people on the streets who raised four fingers on each arm, ”meaning four-plus-four”.

He added that: “What I saw in the elections in Kogi, Bayelsa and Rivers, the use of money and those headless bodies really upset me.”

“I don’t wish to see that anywhere. I would not have won if money and killing was the modus of operation. That is my view of politics.”

However, Buhari did not say express acceptance nor rejection of Kano APC’s endorsement.