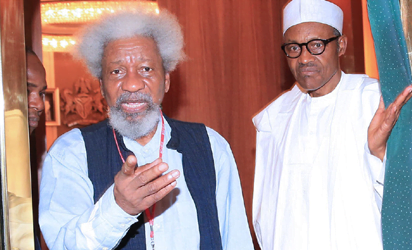 Nobel laureate, Prof. Wole Soyinka has said that it is sickening for anybody to be canvassing for second term for President Muhammadu Buhari and that Nigeria needs reconfiguration.

Soyinka, speaking on Monday with journalists at the Freedom Park in Lagos, according to Vanguard, said those who said what Nigeria needed was just a restructuring of the mind were not saying the obvious.

Soyinka said restructuring of the mind was what could be done on daily basis, but that what the nation needed right now was real restructuring which he called ‘reconfiguring.’

The Nobel laureate also said it was sickening for some people to be canvassing second term in office for President Muhammadu Buhari midway into his first tenure, saying he did not want to be part of such discuss.