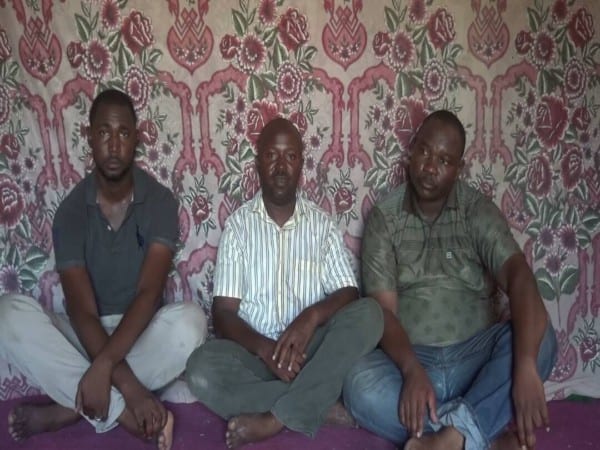 Dr. Solomon Yusuf, one of the four University of Maiduguri (UNIMAID) lecturers abducted by Boko Haram terrorists in Magumeri, Borno State, has written to his wife and lamented the failure of federal government to rescue them from captivity.

It will be recalled that Yusuf and his colleagues were kidnapped on 25 July while obtaining soil samples for hydrocarbon exploration coordinated by the Nigerian National Petroleum Corporation (NNPC) around the Chad Basin.

Yusuf, in a letter to his wife, Hannatu, dated 4 September and obtained by SaharaReporters, reminded the government that he and his colleagues were abducted while on a national assignment and not on self excursion.

He appealed to the government to accede to the demands of the abductors under the control of Abu Mus’ab Albarnawi, warning that delay poses a huge risk to their lives.

“I want to emphasize that delay in getting our freedom poses risk to our dear lives. We never expected we would spend over 42 days (as at 4 September) in captivity because the project has presidential orders to explore hydrocarbon in the Chad Basin,” Dr. Yusuf wrote.

He noted that the Vice President, Professor Yemi Osinbajo, while functioning as Acting President, made a promise during the commissioning of a rice mill in Kebbi State that the government would do everything to secure their freedom within the shortest possible time.

“The government should please continue negotiating with the present contact given to them by the University of Maiduguri as a means of contacting soldiers of Khalifa under the leadership of Abu Mus’ab Albarnawi. We plead with the government to treat our freedom with all sense of urgency and sympathy so that that we can be reunited with our families. The use of force is a serious threat to our lives,” he pleaded.

The lecturer, who thanked the local and international media for focusing on his abduction and that of his colleagues.

He asked after his children and told his wife that he and his colleagues, Messrs Yusuf Ibrahim and Haruna Dashe are alive and yearning to return home.

He also asked the wife to have the newborn named by his father, Mr. Nehemiah Yusuf in his absence.

Read the letter below: 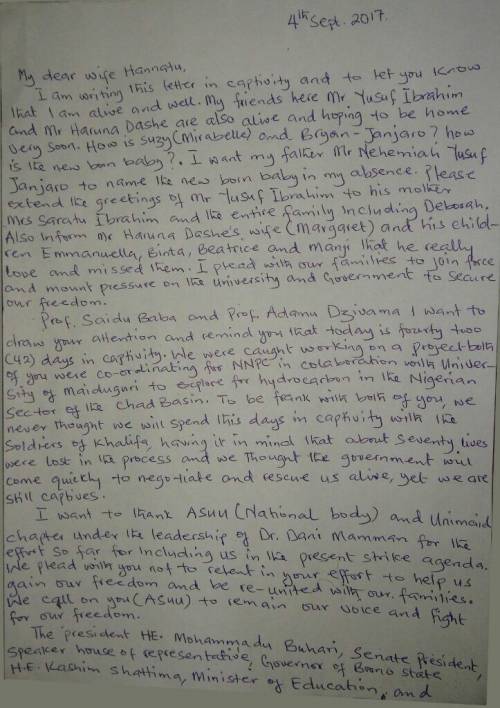 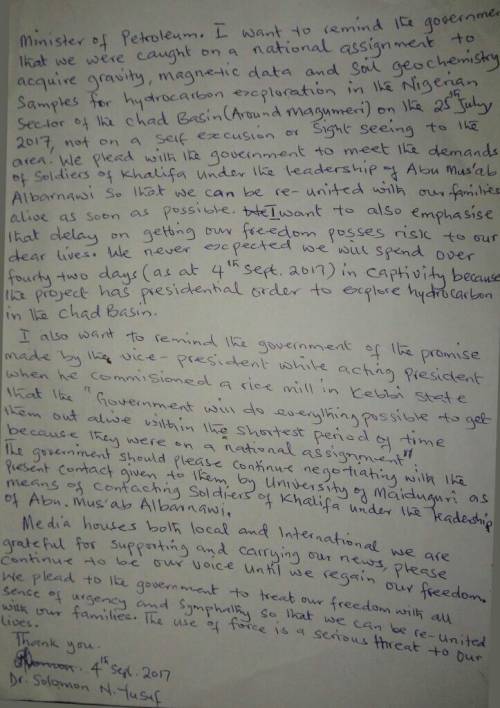