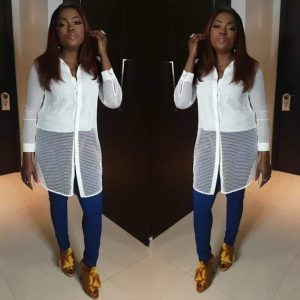 Popular Nollywood actress, Funke Akindele, popularly known as Jenifa who rose to much prominence following the success of her movie; “Jenifa” is a year older today.

Born, 24th August, 1976, the 41 years old actress, came to limelight after featuring in popular United Nations Population Fund (UNFPA) sponsored sitcom; I Need to Know, which ran from 1998 to 2002.

Funke Akindele is reportedly, one of the highest paid actresses in Nollywood and has won several awards in the best actress category particularly for her “Jenifa” Movie and the “Jenifa’s diary” series.

The talented actress, took to Instagram to share a video of herself dancing to her husband, JJC Skillz, song in celebration of her birthday.

The couple are also reportedly expecting their first child together.