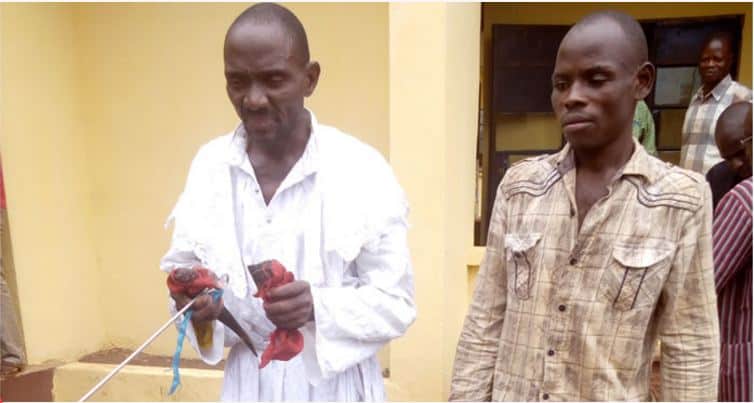 A man, Kehinde Onayiga, who claimed to be a prophet of a white garment church in the Sagamu area of Ogun State, was among 56 suspects paraded by the Ogun State Police Command at the command’s headquarters in Eleweran, Abeokuta, on Thursday, for ritual killing, kidnapping, cultism, armed robbery, impersonation, among others.
Punch reports that, the Police arrested Onayiga, with an accomplice, Musiliu Jibril, who lured a 13-year-old girl, Anuoluwapo Ajisafe into Onayiga’s church were she was killed for ritual purposes.

It was gathered that Anuoluwapo went missing on June 21, 2017, and her whereabouts had remained unknown till date.

Jibril revealed that Onayiga contracted him to source for a female virgin, adding that she was to be used with some fetish materials for some Internet fraudsters (Yahoo boys).

He said, “I was able to lure the girl because she and her mother trusted me. It was the prophet (Onayiga) that contracted me to get a female virgin for ritual. He told me he wanted to prepare some charms for some Yahoo boys.

“I delivered the girl to him in his church at Sagamu and he promised to pay me N20,000. I am yet to get the money.”

Onayiga, who was dressed in his religious regalia while holding two goat horns wrapped in red cloths, denied the allegation.

He said, “It is a lie; he did not deliver any girl to me in my church.”

Onayiga said he trained under an Islamic cleric before leaving to start a white garment church.

He further said he use the fetish-looking goat horns to pray for those brought to his church for healing.

Another suspect paraded for murder was one Bakare Olalekan, who was alleged to have killed a 16-year-old girl, Olayinka Adebayo, in the Ijebu area. He was said to have sold her heart to a ritual killer.

It was gathered that four members of the gang were already in police detention, while Olalekan had confessed to selling two human hearts to one of them.

The suspect said he bought one of the human hearts for N10,000 from a friend called Oye.

Also, four suspected kidnappers, who operated along Siun-Sagamu interchange and Sapade-Ogere area, were nabbed, while three pump-action guns, seven live cartridges, and four expended cartridges, were reportedly recovered from them.

A mother, Mulika Alaba, and her 16-year-old daughter, Olamide Saliu, who allegedly dealt in Indian hemp were also arrested. Eight suspected vandals, who specialised in vandalisation of telecommunications masts across the state, were also paraded.

The Ogun State Commissioner of Police, Ahmed Iliyasu, said the command had deployed operatives to nook and cranny of the state to reduce criminal activities to barest minimum.

Related Topics:Nigeria Police
Up Next

Five arraigned for stealing 600 bags of cement, others in Ekiti