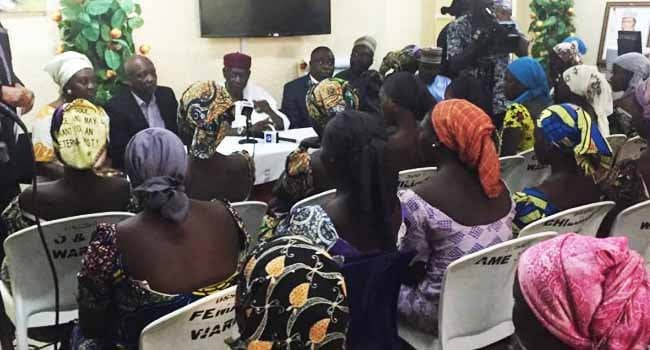 The 82 freed Chibok girls with the chief of staff to the president, Abba Kari

The 82 Chibok girls freed by the Boko Haram insurgent group on Saturday have arrived Abuja to meet with President Muhammadu Buhari in the presidential villa.

Femi Adesina, the special adviser to the president on media and publicity, disclosed this on his Twitter handle.

He said the girls were received at the Nnamdi Azikiwe International Airport, Abuja on Sunday by Abba Kari, the chief of staff to the president.

READ ALSO  Buhari Reveals How Nigeria Will Be After His Tenure

“82 Chibok girls now in Abuja. Received on behalf of the President at the airport by Chief of Staff, Alhaji Abba Kyari. Congrats Nigeria,” Adesina wrote.

82 Chibok girls now in Abuja. Received on behalf of the President at the airport by Chief of Staff, Alhaji Abba Kyari. Congrats Nigeria.

Recall that 82 of the Chibok high school girls who were abducted in mid-April 2014 were released by the Boko Haram Islamist terrorist yesterday.

Garba Shehu, senior special assistant on media and publicity to the president, in a statement released on Saturday, said that negotiations with the Boko Haram sect resulted in the freedom of the girls.
READ ALSO  Five Killed, Women Abducted As Boko Haram Attacks Adamawa Community