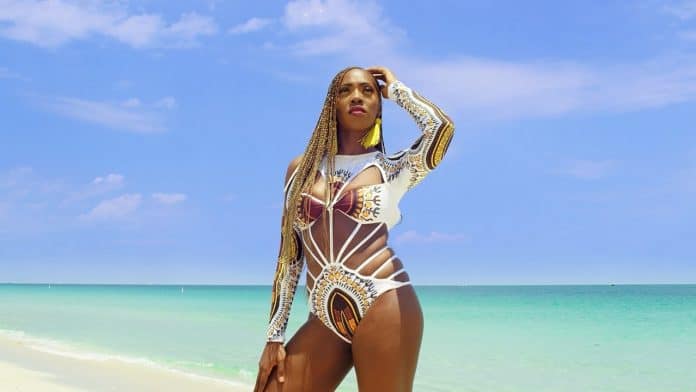 Award-winning singer and Afrobeat star, Tiwa Savage has taken to social media to narrate how she narrowly escaped an attack at an undisclosed beach in Lagos months after her leaked s3x tape.

Naija News reports that the single mother of one made this known via her Instagram page on Monday.

According to the screen diva, she had gone to the beach without her security and was almost slapped by an undisclosed fan on Sunday night.

She wrote; “Omo I do mistake go beach without security, and small cash. Omo I nearly chop slap that day.”

The mother of one also shared videos of herself at the beach with fans hailing her with the caption: “Hahahahaha I love you all too but from afar.”

In another post, she wrote: “Nothing like a calm night in Lagos these days. E even too cost step out.”

It would be recalled that  Tiwa Savage revealed some hidden truths about herself in a video.

The video series started by Tiwa Savage is part of her promotion for her hit single, “Somebody’s Son”, featuring American singer, Brandy.

Tiwa Savage in her recent video titled “5 FUN FACTS ABOUT TIWA SAVAGE” on ‘CATCHING UP WITH TIWA: Episode 5/5’, disclosed five things about herself most people may not know.

She said: “I don’t like wearing heels. I can’t cook really well, Nigerian dishes though. I don’t like cooking but I can.

Related Topics:lagosTiwa Savage
Up Next

5 Things You Must Know About Late Juju Singer, Dayo Kujore