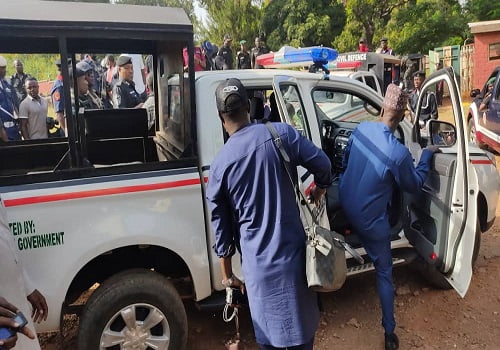 Reports from Plateau state say security operatives have arrested the speaker of the State  House of Assembly who was ousted last Thursday, along with 10 other lawmakers who supported him.

Naija News understands that police arrested the Honorable Abok and the other lawmakers around 3:15 p.m after laying a siege on the parliament building for about 8 hours.

Ayuba, when repeatedly asked by reporters if he was under arrest, replied: “I cannot say whether I am under  arrest at the moment.”

Hon Zingtin Sohchang, a member of the state assembly representing Langtang South, was quoted as saying by reporters:

“We are now being bungled into four Hilux vehicles by security men to yet to be ascertained place and if after 20miniutes you call us and no response, you should know that we have been taken to an unknown place,” He said.

Naija News had earlier reported that a group of youths loyal to the impeached Speaker stormed the assembly this morning displaying placards with different inscriptions to protest the removal of the politician.

In a bid to stop the protesters from causing more chaos, security agents at the statehouse reportedly began firing shots in the air to disperse the people.