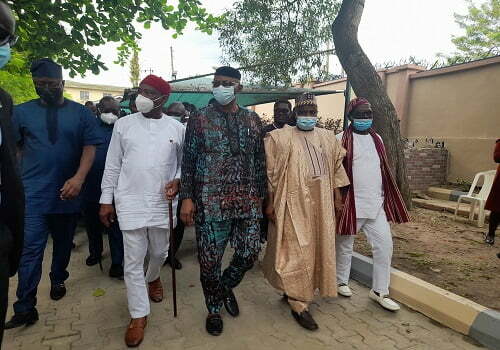 Speculations about the imminent defection of a former Governor of Ondo State, Olusegun Mimiko to the Peoples Democratic Party (PDP) received another boost on Thursday.

This is as four Governors belonging to PDP stormed Ondo State where they held a closed-door meeting with Mimiko in his Ondo town country home.

Ahead of the 2023 general elections, the meeting is understood to be part of ongoing efforts to woo the former Ondo Governor back to the PDP.

At the end of the meeting, Mimiko said his supporters and the stakeholders in Zenith Labour Party (ZLP) will be the ones to determine his next move.

He stated that he would consult with them and together, they will decide the next line of action.

Meanwhile, the leadership of the Christian Association of Nigeria (CAN) has warned political parties in the country against heating up the polity with either Christian/Christian ticket or Muslim/Muslim presidential ticket come 2023 general election.

CAN’s President, Samson Ayokunle stated this on Thursday while leading the Association’s leadership to a parley with the Deputy Senate President, Ovie Omo-Agege in his office at the National Assembly complex in Abuja.

“Concerning 2023 elections, we would admonish you, politicians, not to heat up the polity in any way as the campaigns are opened by guiding the utterances that would be coming out of you. There is already tension in the land because of insecurity.

“We equally want to urge you on the presidency that a balance of both religious practitioners be considered. We don’t want Christian/Christian ticket nor Muslim/Muslim ticket,” he said.