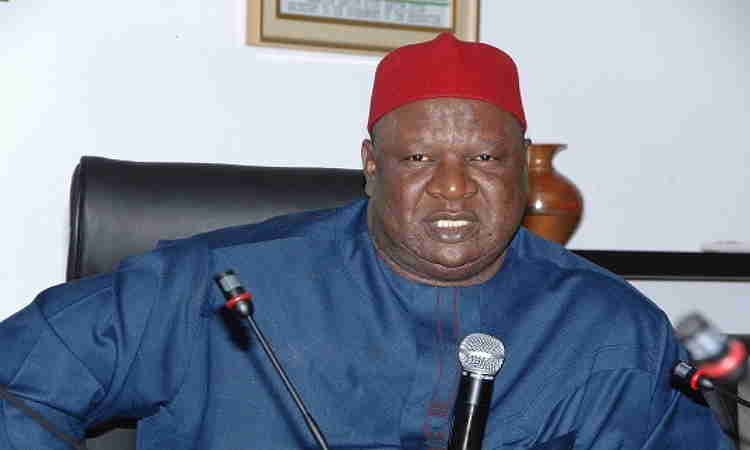 Former Senate President, Anyim Pius Anyim, is still being held by officials of the Economic and Financial Crimes Commission (EFCC) over an alleged diversion of N780 million Aviation Ministry’s fund.

Naija News reports that the former Secretary to the Government of the Federation had reported to the commission’s headquarters in Abuja on Sunday afternoon and has been held since then.

Anyim was invited by the anti-graft agency following an investigation in a case involving a former Aviation Minister and serving senator, Senator Stella Oduah.

It was gathered that part of the rehabilitation funds for the Aviation ministry was allegedly traced to a company in which Anyim was a director.

Speaking with The PUNCH, a senior EFCC official said the former SGF was again quizzed on Monday on how the ministry’s fund found its way into his company’s account and his relationship with Oduah.

He added that Anyim spent the second night in the EFCC custody in Abuja and will be released after he has provided investigators with satisfactory answers.

The official disclosed that the former Aviation Minister, Oduah would soon be invited for a session with the investigators.

He said, “The former SGF is still with us answering some hard questions on how the N780m found its way into his company’s account.

“He is cooperating but we would only release him on bail after he has provided satisfactory answers to our queries.”

The probe of Anyim follows the allegation by the Pandora Papers that Oduah allegedly acquired four London properties, hid behind an anonymous offshore company and possibly committed a breach of Nigeria’s public service code of conduct law.

According to the report published on Premium Times, Oduah reportedly purchased the properties between 2011 and 2014 when she served as a minister under the administration of former President Goodluck Jonathan.

While different courts have ordered the freezing of assets linked to Ms Oduah (who recently defected to the All Progressives Congress from the Peoples Democratic Party) in Nigeria over her indebtedness to banks, the four anonymously acquired London properties – alongside one other bought in her own name and two others bought in the name of her Nigerian-registered company – remain owned by her.