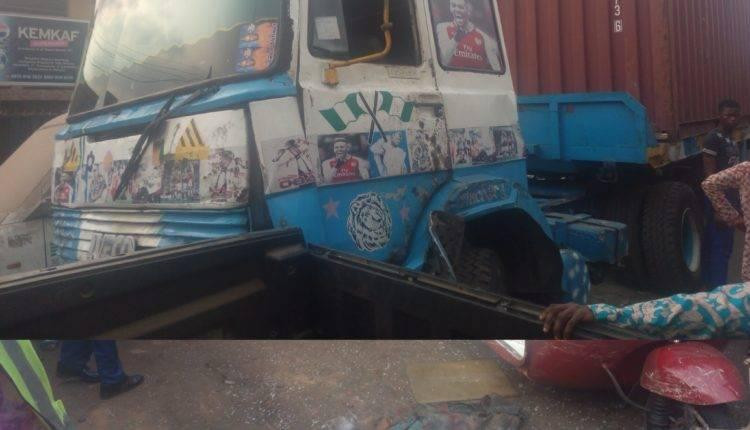 A ghastly tipper accident has claimed the life of a serving female member of the National Youth Service Corps (NYSC) identified as Oluwale Abidemi.

The youth reportedly died on the spot while the other woman sustained various degrees of injuries.

The survivor is now being treated at a hospital while the remains of the serving corps have since been deposited at an unknown mortuary.

Affirming the incident, spokesperson of the Edo State Police Command, DSP Kotongs Bello said: “Today, about 12:30 pm, a tipper carrying sand failed broke at Ogba bridge and ran into a Lexus SUV and a motorbike,”

“The motorbike was conveying one Mrs Maria who was badly injured and now receiving treatment at the Central Hospital, Benin and a youth corps member who was said to be the sister of Maria, died on the spot,” he added.

This is coming barely a month after a National Youth Service Corps team sympathised with the family of a late corps member, Mr Chikwado Ezururike in Abia.

Naija News reports that the scheme presented in a cheque the sum of ₦1 million as a death benefit to the family of the deceased.

The presentation was done at the NYSC Abia Secretariat in Umuahia on Wednesday.

It could be recalled that Ezururike and four others died in July following a horrible accident while on their way from Uyo in Akwa Ibom to the NYSC Orientation Camp in Katsina State.

Ezuruike, a graduate of History and International Studies of the University of Uyo, and the other persons involved in the auto crash along Abuja-Kwali Expressway.

The consolation visit to the families of the late corps member was lead by Mr Emmanuel Ayeniko, the Assistant Director (Insurance), NYSC Headquarters, Abuja, on behalf of the Director-General of NYSC, Brig.-Gen. Shuaibu Ibrahim.