A Nigerian lady who claims to have the ability to see the future has predicted that former president, Goodluck Jonathan will become president again in 2023.

The lady, identified as ‘Igbo-Fulani girl’, on the microblogging platform, Twitter made the submission while predicting the Big Brother Naija housemates that were going to be evicted from the reality show yesterday.

According to her prediction, Saskay will be evicted this weekend followed by Whitemoney then Pere on Sunday.

Naija News understands however that Saskay and Yousef were evicted from the BBNaija reality show on Sunday.

Both housemates were nominated alongside Emmanuel, Cross and Angel who were the strongest contenders on the eviction list.

Yousef and Saskay had the least voted as announced by the show host, Ebuka Obi -Uchendu.

Reacting to Saskay’s eviction, Igbo Fulani reaffirmed her predictions while making more revelations of what is to come.

“I said Saskay will be evicted, you guys called me names. You see. Thus {SIC} weekend Whitemoney will be evicted. Also, make my words, Our next president is GEJ. Youse Pere” 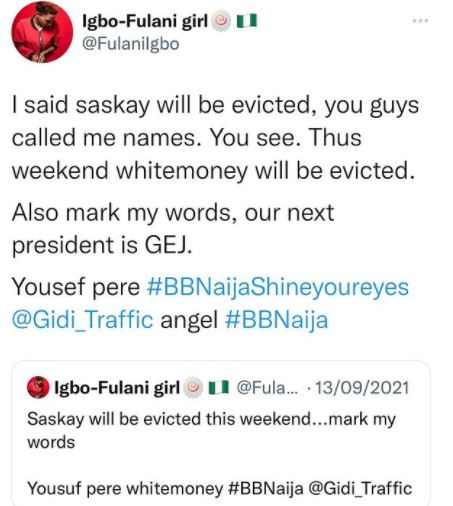 The tweets have however sparked reactions on social media with many airing their opinions on what they think of the predictions.

See some of the reactions below.

@branezza wrote; “And big brother will become the winner. Yeye!!

@efemena_u wrote; “Lmao,even I’m not a Money fan and this is hilarious to me. People that don’t watch jack be tweeting rubbish. Unless he’s sick or requests voluntary exit or biggie hand picks him to go(😂) or they do a draw and whoever picks evicted goes home,Baba isn’t going anywhere.”

@mrk.pad wrote; “So because they evict a bbn housemate this one think shes now a prophet.. smh… lol how she ruin everything is by saying white money will be evicted..big brother evicting people favorite.. if she be bb e go evict am…and as if thats not dull enough u think someone will just leave presidency sit and come back a week later to contest lol
@stardomgys wrote; lol 😂😂😂😂 definitely you are a whitemoney fan you just need people to wake up and vote harder for white money incase is up for eviction… I get your bro”