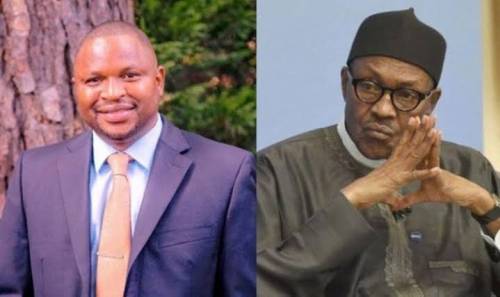 An associate professor in the United States, Farooq Kperogi, has claimed that the President of Nigeria, Muhammadu Buhari, does not bear the real names of his father.

The social critics noted that President Buhari’s surname is not his father’s real name but a name derived from a particular town.

He wrote, “Muhammadu Buhari’s very name is wrapped in a curious omission. In most parts of the world, people’s last names are usually either their family name or their father’s first name. Not for Buhari.”

”Muhammadu (which his teachers spelled as “Mohamed” when he was in secondary school) is his first given name and Buhari is his middle name, not his surname. He was named after a prolific ninth-century Persian Hadith compiler by the name of Muhammad al-Bukhari who was born in a city called Bukhara in what is now Uzbekistan.”

“Bukhari isn’t a personal given name; it’s a demonym, that is, a name given to people who come from a particular place, such as Nigerian, Briton, American, Lagosian, New Yorker, etc. Bukhari simply means a native of the city of Bukhara in Uzbekistan, a West Asian nation that used to be a part of the Union of Soviet Socialist Republics (USSR).”

“In Muslim and Middle Eastern linguistic traditions, the letter “i” is usually added to the end of the names of villages, towns, cities, and countries to form demonyms. That’s why someone from Pakistan is called a Pakistani, someone from Israel is called an Israeli, someone from the UAE is called an Emirati, and so on. If the demonym of Bukhara were to be given in Hausa, it would be Danbuhara. In Yoruba, it would be Omobuhara. In my native Baatonu, it would be Buharagi. (My last name, Kperogi, is a demonym, and it means someone from Kperu, the short form of my hometown’s name, Senru Kperu, but which Yoruba people call Okuta).”

“So how did Muhammadu Buhari come to be known by his names? Because of the immense reverence that Muhammad al-Bukhari enjoys among Sunni Muslims, Muslims have historically honoured him by naming their children after him, so instead of just calling them Bukhari (which they may not be since they may not be natives of Bukhara in Uzbekistan), they typically combine the man’s first and last names: Muhammad Bukhari.

”Most Nigerian languages, including Hausa, don’t have the phoneme “a,” which sounds almost exactly like the sound you produce when you are discharging mucus from your throat. The closest phonemic approximation of that sound is “h,” which explains why “Bukhari” is rendered as “Buhari” in many African languages”

“Our Muhammadu Buhari doesn’t bear his father’s name even though he is so proud of his paternal ancestry that he gratuitously flaunts it. For instance, in his October 18, 1961 “Application to sit for RNA Qualifying Examination,” he called attention to his ethnic identity even when it wasn’t warranted. “I have the honour to apply for regular service in the Royal Nigeria Army. My name is Muhammadu Buhari and I am a Fulani. I am eighteen years old and I am in Form Six at the Provincial Secondary School Katsina,” he wrote.

“Buhari’s father who gave him the Fulani bloodline he brandishes (his mother is Kanuri) was called Adamu Bafallaje (or Bafalle in Hausa). Buhari’s older brother who died in a car crash in the late 1980s and whose Buhari-lookalike son, Fatuhu Muhammad, represents the Daura/Sandamu/MaiAdua federal constituency in the House of Representative was called Mamman Danbafalle. (Danbafalle means son of Bafalle in Hausa, and Mamman is the Hausa domestication of Muhammad. It’s common in Muslim families to have many siblings named Muhammad, but they’re often differentiated with their middle names).”