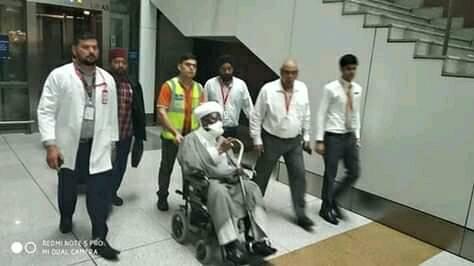 Concerned residents of Abuja have called on the Federal Government to facilitate the release of the international passports of the leader of the Islamic Movement in Nigeria, Sheikh Ibraheem El-Zakzaky, and his wife, Zeenat, to enable them to travel abroad for medical treatment.

They also urged the government to prevent the return of street protests in the nation’s capital by El-Zakzaky followers over the continued seizure of his travel documents.

Speaking at a press briefing in Abuja, on Thursday, the group’s Chairman, Ayide Danjuma Abdul, said past protests by the sect had been mismanaged, leading to bloodshed as well as disruption of many businesses.

Abdul said, “We are privy that Sheikh Zakzaky and his wife were flown to Abuja after their release in the hope of jetting off for the treatment, which their deteriorating health condition requires, and that the only obstacle to their wish of travelling overseas for medication is the inability to receive their international passports and other necessary documents.

“We call on the Federal Government to help facilitate this, as we seriously fear the return of protests in Abuja. Protesting is a constitutional right, and we don’t blame the protestors for discharging one of their constitutional rights. But the protests by the IMN in the past had changed Abuja from the tranquil city it used to be to seemingly a battle ground.

“As a result, many businesses have been disrupted, and lives have been lost on numerous occasions, including two journalists and a police officer.

“We, therefore, urge the Federal Government under President Muhammadu Buhari to release the travel documents of Sheikh El-Zakzaky and his wife to enable them to travel to the hospital of their choice. This will sustain the calm and peace which have since their release returned to Abuja.”