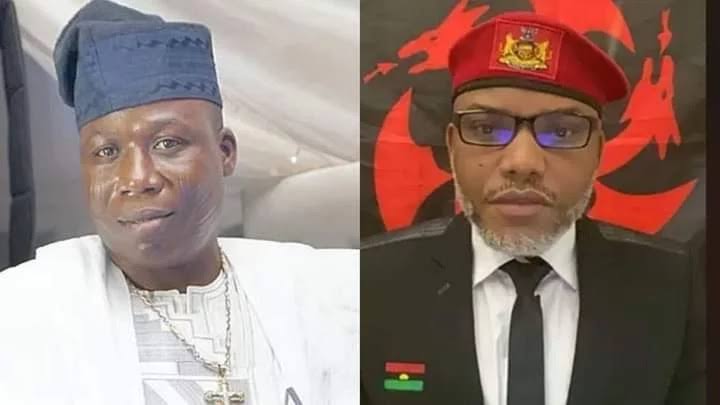 The Governor of Kano State, Dr. Umar Ganduje has warned that Nigeria cannot afford another war, stressing that secession would compound the problems of the country.

NaijaNews reports that the governor, who masterminded the break-up of the Kano emirate into four traditional councils, said this at the second quarterly public lecture organized by the All Progressives Congress (APC) press corps in Abuja on Thursday.

Ganduje also cautioned the leader of the proscribed Indigenous People of Biafra (IPOB), Nnamdi Kanu, and Yoruba freedom fighter Sunday Igboho against inciting youths to take up armed struggle against the state.

He warned Nigerians to shun the agitation for secession, saying that there is no challenge that is bigger than the country’s political class to solve.

“It is part of democracy that people should air their views, but it should not translate grievances into violence and bloodshed,” Ganduje said.

“While the unity of Nigeria should be discussed, the agitators must be strongly cautioned to channel their grievances to the appropriate quarters without perpetrating acts that could be interpreted as an attempt to enthrone instability and dismember the country.

“Those in the streets of South-West or South-Eastern states, carrying dangerous weapons, attacking security personnel and formations as well as innocent citizens, whose only political education comes from misguided and narrow role models, should be cautious not to become cannon fodders for mischief-making.

“Nigeria is bigger than all of us and there is no challenge that is bigger than the political class to solve. We can make mistakes, but we are mature enough to correct such mistakes as part our development processes.

“The leadership of the groups in the two geopolitical regions spearheading the bid for secession from Nigeria, have gone too far.

“They (Igboho and Kanu) incite followers to acts of violence against Nigerian security forces and have established a paramilitary wing.”

According to him, no serious government will stand by and watch this scenario and go to bed.

He noted that Nigeria has had to fight an appalling war between 1967 and 1970 to preserve the country.

He said, “The North had paid its dues in that war, as indeed it did in many ways throughout the history of the country. Under our current circumstances, no Nigerian should welcome another war to keep the country together because violent secession from any part of Nigeria would compound the problems all Nigerians live with.

“It is my hope that we reach a point in Nigeria where we can openly discuss the ills in our society, with a mindset of finding sustainable solutions, and further entrenching our nation’s unity.

“Nigeria will remain united. Let’s not entertain any fear. We have become too fused to be divided.”

Ganduje advised the legislature to take deliberate steps that enhance the concept of representation in a democracy.

“Our state and federal legislators should take the job of representation more seriously. If anything is wrong in any community, the first port of call should not be the Office of the Governor or even the Divisional Police Office. It should be the constituency office of any complainant’s representative,” he said.

They x-rayed the argument for, and against the unity, integration and cohesion of Nigeria as well as the issues of secession, disintegration and conflict in Nigeria, and concluded that it was better to sustain Nigeria’s corporate existence.