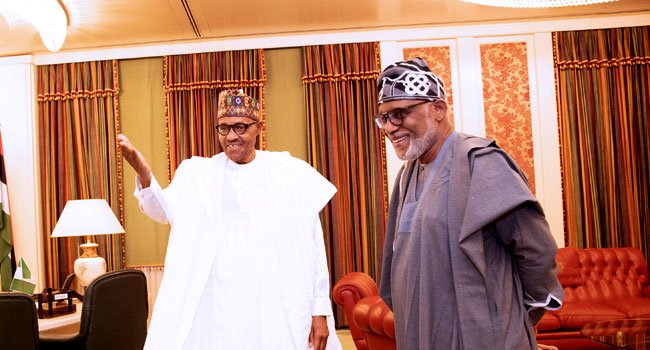 The Buhari Media Organization has accused the Ondo State Governor Rotimi Akeredolu of disrespecting President Muhammadu Buhari and the office of the presidency.

The organization said it was wrong of Governor Akeredolu to be publicly attacking the President and his media aide, Mallam Garba Shehu.

The BMO in a statement signed by its Chairman, Niyi Akinsiji, and Secretary Cassidy Madueke said Akeredolu was not a popular choice to become the Ondo State Governor but rode into power on the credibility of President Buhari.

It, therefore, accused the Governor of turning around to bite the finger that fed him.

The BMO was reacting to the disagreement of the Ondo State Governor with the position of the presidency on the ban of open grazing of animals by the southern governors.

The organization argued that contrary to insinuations by Akeredolu that Shehu was not speaking the mind of the president, Buhari authorized the statement released by his media aide.

Naija News recalls after the souther governors had banned open grazing in their region, the Presidency condemned the Southern Governors’ proposed plan to enforce the ban on open grazing.

But Akeredolu responded that there was no going back on their decision, further lashing out at the Senior Special Assistant on Media and Publicity to President Muhammadu Buhari, Mr Garba Shehu over his recent comments on open grazing.

Akeredolu described Shehu as an ‘agent provocateur’ over his position on the resolutions of the 17 southern governors which banned open grazing after their meeting in Asaba, Delta State.

According to the Governor, Shehu is not speaking for the Presidency or President Buhari over his recent submission which negated the ban on open grazing policy as adopted by the Southern Governors.

But the BMO in a statement where it revealed its position on the matter, accused Governor Akeredolu of disrespect and attacks on the person of Garba Shehu.

The group said: “It is unfortunate that Governor Akeredolu could sign off on a vitriolic press statement by one Doyin Odebowale that not only calls to question President Buhari’s right to proffer an alternative to open grazing but was also a barely disguised attack on the Presidential Spokesman Garba Shehu who a few days ago informed Nigerians of his principal’s approval of an ‘actionable plan of rehabilitating grazing reserves’.

“We find it strange that a governor elected on the same platform as the President and whose rise to the position he presently occupies owes to President Buhari’s goodwill at a time the governor was not in the good books of the party’s influential leaders could hide behind an uncouth aide to throw subtle shade at his benefactor.

“Aside from name-calling and outright insults directed at the President’s spokesman, Akeredolu through his rude aide accused Mallam Garba Shehu of attributing what he described as a unilateral decision to President Buhari and also gave the impression that he was not speaking the President’s mind on the matter even though there was a reference to a commissioned report that was the outcome of consultation with farmers and herders.

“Yes, the Presidential spokesman alluded to the revival of forest reserves and added that it would be in states that are ‘committed to it as a solution as well as those that are compliant with stated requirements’, but surprisingly the governor’s aide went ballistic, apparently without adequately comprehending the message, and proceeded on a rant that was not different from the inflammatory rhetoric Sunday Igboho and his co-travellers have been pushing out.

“We know that this is not the first time that Governor Akeredolu would be attacking the Presidential spokesman for doing his work as we recall that when Mallam Garba called him out in January this year for issuing an eviction notice to herdsmen in Ondo state, there was a similar response from certain Ondo government officials who claimed he was supporting criminals even after the governor claimed he was quoted out of context.”

BMO also alleged that with the statements coming from the Akeredolu camp, it is difficult to believe that he is not supporting Yoruba nation agitator, Sunday Igboho in his plans to break away from Nigeria.

“It is becoming increasingly clear that Akeredolu has a partner in the political thug that is at the forefront of demands for a Yoruba nation despite his half-hearted attempt to dissociate himself from Igboho. Otherwise, why would his aide pretend not to know the difference between peaceful and law-abiding herdsmen who the ranches would be available to and those he called ‘denizens of the forests’?

“We are constrained to say that the statement by the governor’s aide reeks of malice, and the references therein are outright falsehood by someone out to misrepresent an innocuous statement from the Presidency that outlined how President Buhari intends to institutionalize ranching as opposed to governors who are keen on banning open grazing but have no alternative plans.

“We make bold to say that President Buhari authorized the statement issued and signed by Mallam Garba Shehu on the Federal government’s plan to rehabilitate forest reserve for cattle ranching and if Governor Akeredolu has any problem with it, he should publicly take on the President and not hide behind the naked finger of an uncivilized aide.

“We also urge him, as a matter of decency, to call his attack dog to order for going beyond his bounds by making unverified allegations against a Presidential spokesman whom he irresponsibly described as a major supporter of the current pervasive anarchy in the land’ as well as his resort to ethnic profiling to drive home his warped position”, it added.