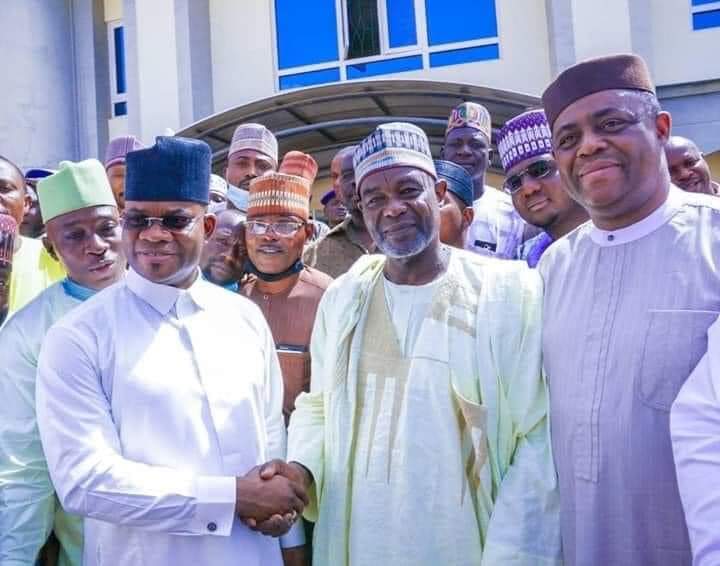 The Coalition of Northern Groups (CNG) has said that Governor Yahaya Bello of Kogi State and former Minister of Aviation, Femi Fani-Kayode, are driven by selfish interests ahead of the 2023 general elections.

Naija News reports that both political leaders met with the Amalgamated Union of Foodstuff and Cattle Dealers of Nigeria (AUFCDN), to suspend its strike action.

AUFCDN President, Muhammad Tahir, told newsmen that they resolved to suspend the strike action after the Federal Government promised to pay N4.75bn compensation, ensure the protection of its members and stop all forms of multiple taxation and intimidation from security officials on the highways.

But in a statement on Thursday by its spokesman, Suleiman Abdul-Azeez, the group said Bello and Fani-Kayode met with the union to propagate their own agenda.

He added that both politicians do not have the interest of the North at heart, accusing them of making fake promises to the dealers.

The statement reads: “The Coalition of Northern Groups CNG is of the view that the conclusion to suspend strike action embarked by the cattle and foodstuff dealers under the aegis of the Amalgamated Union of Foodstuff and Cattle Dealers of Nigeria (AUFCDN) was forced on the union leaders who were as well fooled.

“With earlier reports that the leadership of AUFCDN was arrested and detained by the security and intimidation of union leaders out to enforce the blockade by the Military, everyone can see that the strike suspension was far from voluntary.

“Another pointer is the involvement of Governor Yahaya Bello of Kogi State who apart from serving his interest in the 2023 presidency, has no direct stakeholding in the issue.

“We all know that Governor Bello had never shown any concern over the plight of the northerners when they were attacked during the EndSARS uprising and at Sasha, Ibadan. For someone like that to suddenly move to intervene to halt legitimate pressure to extract compensation for the innocently attacked northerners is certainly mere self-service aimed at personal political ascendancy.

“The involvement of Bello with Former Minister of Aviation, Femi Fani-Kayode – a self-appointed enemy of the North who would leave no stone unturned in furthering the plot to destabilize the North, is another pointer that the intervention was mischievous and certainly not in the interest of northerners.

“Besides, the agreement reached did not disclose any commitment by the authorities on the demand for payment of compensation for lives and properties lost by northerners to the attacks.

“There was also no solid commitment for the guarantee of the future of northern settlers and traders living as minorities in the South or carrying out legitimate businesses there.

“Northerners should therefore be wary of the maneuvers of such southern politicians and their northern collaborators like Bello whose eyes are only primed on the presidency and not the general safety of the country and the North in particular.”