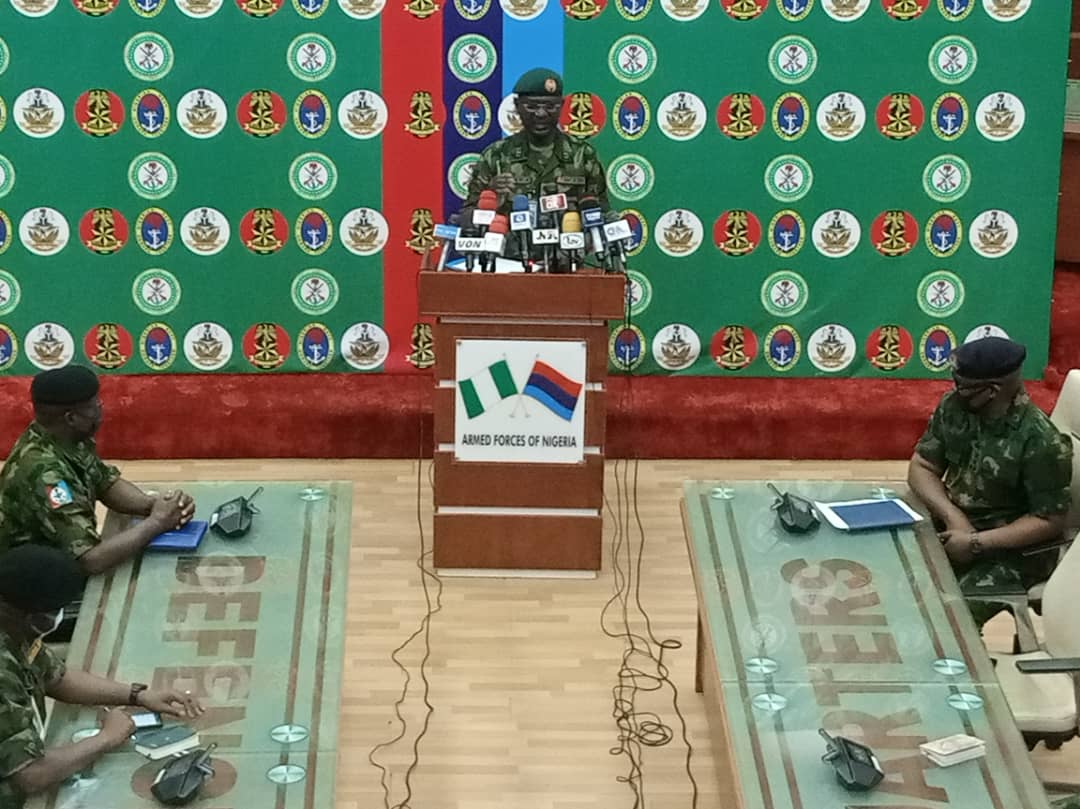 The Defence Headquarters (DHQ) has assured Nigerians that the new service chiefs will introduce fresh ideas in tackling insurgency and other criminal activities in the country.

This was made known during a press conference on Thursday by the Coordinator, Defence Media Operations, Defence Headquarters, Major General John Enenche.

He explained that the service chiefs have already started implementing some new ideas, adding that the welfare of troops will be given greater priority.

Enenche went ahead to give a general update on the activities of the Nigerian Military between January 21 to February 11, 2021.

He also gave updates on the activities of the troops in the various regions of the country, going ahead to plead for the cooperation of Nigerians in boosting the morale of the troops and ensuring the battle against insurgency is won.

In his words, “You are all aware of the recent changes in the leadership of the Armed Forces of Nigeria. There is no doubt the changes would usher in new modus operandi for tackling the security challenges in the Country.”

“The Service Chiefs on assumption, immediately hit the ground running by conducting an operational visit to the North East. They have also visited some operational areas in the Country to interact with troops and commanders in the field in the various theatres.”

“It is aimed at ensuring that the military high command come up with new ways and means of tackling the security challenges.”

In this regard, the service chiefs led by the Chief of Defence Staff Major General LEO Irabor (GSS) commenced action at all levels.

These include carrying out strategic, administrative, operational and logistics adjustments, changes and reviews, to improve the security situation in the Country. As such, all stakeholders are requested to give maximum support to the Armed Forces of Nigeria under the leadership of the Chief of Defence Staff.

Troops of Operations HADARIN DAJI have continued to sustain their efforts in the North-West Zone of the Country progressively. The gallant troops within the period in focus carried out several land and air operations in the Zone.

These include clearance and ambush operations as well as aggressive ground and aerial patrols in order to ensure security of lives and property within the Zone.

In the North East Zone, the Armed Forces of Nigeria working together with other security agencies have continued to sustain the onslaught against the insurgents. Within the period under review, troops of Operation LAFIYA DOLE, on various occasions made contact and engaged some Boko Haram/Islamic State West Africa Province criminal elements.

In the various encounters, more terrorists’ enclaves have been destroyed along with their logistics facilities and scores of their fighters neutralized through ground and air strikes at different locations in the North East Zone.

Troops of the Armed Forces of Nigeria and other security agencies operating in the North Central Zone of the Country are also sustaining the fight against armed banditry and other criminal vices in the Zone with remarkable results. Several combined land and air operations were conducted within the period, which resulted in the neutralization of scores of armed bandits and recovery of caches of arms and ammunition. As the land troops maintain aggressive fighting patrols to dominate the theatre of operation, the air component dominated the airspace with air reconnaissance activities.

In the South-South Zone, troops of Operation DELTA SAFE have continued to protect and safeguard our coastal and territorial waters through intensive sea and creek patrols. Additionally, troops conducted anti-crude oil theft and anti-illegal bunkering operations as well as other anti-illegal maritime activities, and in the process, deactivated several illegal refining sites within the period in focus. In the course of the operations, large quantities of stolen crude oil and illegally refined AGO as well as some equipment were recovered.

In the South West Zone, troops have sustained their efforts in the fight against pipeline vandalism and crude oil theft as well as other economic saboteurs through raids and arrests within the period. Consequently, several pipeline vandals and smugglers were arrested and handed over to appropriate prosecuting authorities for necessary action. Also, several bags of foreign parboiled rice and illegally smuggled items and vessels were seized.
On this note, we urge Nigerians to support our efforts in tackling security challenges confronting our dear nation. Our collective efforts are essential in the fight against the various security vices in the country. The Military High Command reassures the general public of its untiring dedication towards securing the Country. Members of the general public are enjoined to continue providing timely information on the activities of criminals in their various localities to the military and other security agencies for prompt and effective action.

It was reported that the soldiers were on patrol to clear some Boko Haram elements in the area following credible intelligence when they were ambushed.

A senior military officer had told an online medium that the gunmen subsequently engaged the troops with overwhelming firepower, killing about 20 soldiers.

The source said the shootout resulted in the destruction of three operational vehicles of the Nigerian Atmu.

But in a statement on Thursday in Abuja, the Director, Army Public Relations, Brig.-Gen. Mohammed Yerima, described the report as false, fake, and baseless.

EFCC: Why Buhari Is Yet To Take Action Against Magu – Malami

Why Yoruba Must Protect Themselves From Fulani Herdsmen – Sunday Igboho