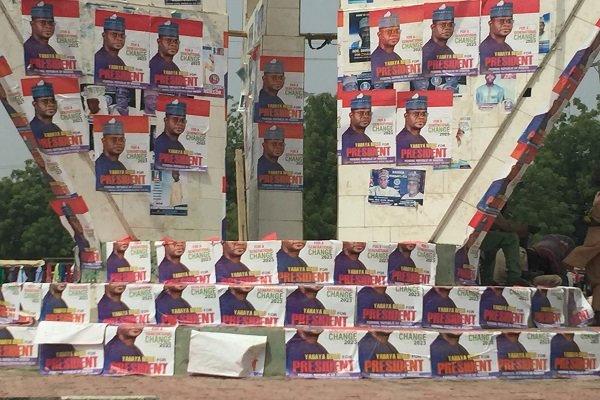 The presidential campaign posters of the Kogi State Governor, Yahaya Bello, has been spotted at a roundabout in Damaturu, Yobe State.

The campaign poster which had no logo of any political party on it had the inscription, “Yahaya Bello for President, change 2023.”

This is coming at a time a pro youths group, the North Central Coalition For Leadership (NCCL), has urged Nigerians to support the presidential ambition of Governor Yahaya Bello of Kogi State ahead of the 2023 election.

Speaking to reporters on Thursday, the National Coordinator of the group, Williams Charles, said the group will soon begin a massive campaign for the Kogi governor.

He disclosed that the group will also purchase the All Progressives Congress (APC) Expression of Interest and Nomination Form for Bello if he decides to contest for the 2023 presidential election.

He said: “We members of NCCL (and) our resolve, since our formation, is primarily to ensure that Gov Yahaya Bello of Kogi State, a youth from North Central seek for the office of the president and emerges victorious.

“Our reason for embarking on this project is based on the gross marginalization of North Central in the Democratic leadership of this great country and the relegation of youth to the background of leadership at the presidential level.

“At a time we seem more divided than united, What Nigeria needs at the moment are security and unification. Governor Yahaya Bello has continued to prove that he has all it takes to deliver security and unify Nigeria together.

“It is for this reason that we have decided to pull resources together using crowdfunding, via our online website to purchase the Expression of Interest and Nomination Form for Gov. Yahaya Bello when he presents himself to our party members; to be chosen as its candidate for the 2023 presidential election.”