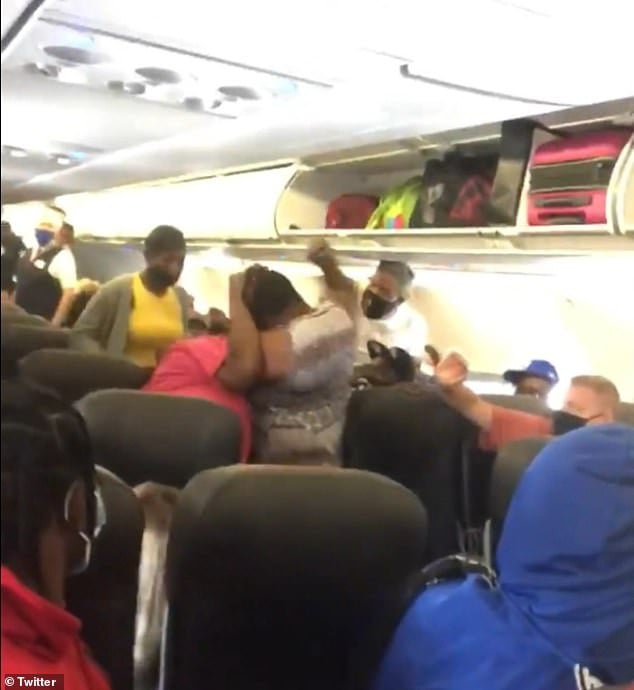 A video now viral on the internet has shown two women exchanging blows in an American Airlines flight over face masks.

Reports had it that the fight started after the flight authorities had ordered passengers onboard to exit the flight for not wearing their face masks.

Naija News understands that the event was first posted on the microblogging site, Twitter, by media personality, Caryn Ross after her husband filmed it. She reported that the dramatic fight between the two ladies happened in the flight going from Las Vegas to Charlotte, North Carolina.

She shared, “Nothing like a morning Fight Club as tempers flared on @AmericanAir LAS-CLT flight today,” Ross said in the clip. “So much for social distancing! #AAFightClub”

The two started throwing punches at each other after one of them stood and shouted at the other passenger, who quickly gets up and attacked her. Naija News observed that one of them was wearing her face mask but it was unclear whether the other woman is wearing one.

READ ALSO  Man To Pay #500,000 For Failing To Present Son In Court For Rape Case

The fight, however, gets dirty until the plane authorities were called to intervene. Moments later, American Airlines released a statement sharing their COVID-19 mask policy and the events that stirred up the fight.

The statement reads; “On Monday, a customer on American Airlines Flight 1665 with service from Las Vegas to Charlotte failed to comply with our mandatory face-covering policy after boarding the aircraft prior to departure. In accordance with our policy, the customer was subsequently asked to leave the aircraft and became disruptive, resulting in an altercation with other passengers.

“American Airline, like other U.S. airlines, began requiring customers to wear a face-covering while onboard aircraft beginning May 11. We have since strengthened our policy to require face coverings be worn at airports and onboard, and announced in June that we may deny future travel for customers who refuse to wear a face-covering for the duration of this requirement.”

Watch the video below as shared by MailOnline;

In another news, Nigerians accused the Federal Government of Nigeria of lifting the ban on International flights because of Mamman Daura, President Muhammadu Buhari’s nephew.