Nigeria’s Minister of Justice and Attorney General of the Federation Abubakar Malami has instructed the Inspector General of Police, Adamu Mohammed to provide security for the 17 newly sworn-in lawmakers in Edo State.

The Minister’s directive follows a petition to his office by Idahosa-West Chambers over the recent political developments in Edo State.

Malami noted in his directive to the Police boss in a letter dated August 5, 2020 that the step became necessary to avert a break down of law and order in the state.

Naija News recalls 17 lawmakers who are believed to be loyal to the All Progressives Congress (APC) and its governorship candidate, Pastor Osagie Ize-Iyamu, were sworn-in at an undisclosed location in the state after the state House of Assembly was invaded by security operatives on Thursday.

They are in contention with another group of seven lawmakers said to be loyal to incumbent Governor Godwin Obaseki.

See the letter in which Malami gave the directive: 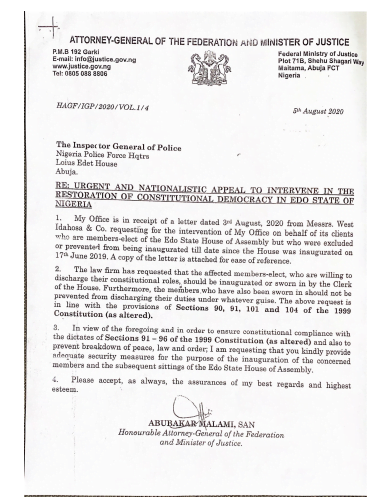 Meanwhile, the Edo governorship election is scheduled for September 19, 2020.